How Hitler Succeeded in Intimidating the World Powers

- Paperback (260 pages)
For six years Hitler, and his mostly-bloodless Nazi revolution, captured the excitement of the German people with a string of amazing achievements. The world that feared him couldn't help but admire him, too. 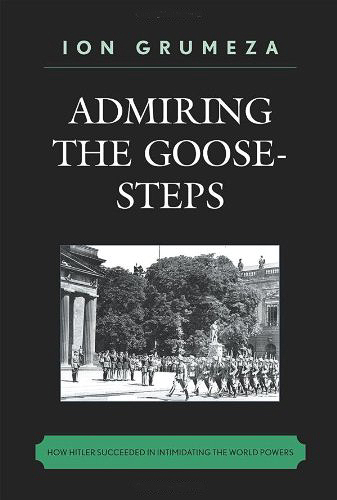 Admiring the Goose-Steps details six years of Hitler's Third Reich - 1933-1939; a time when his nation was equally feared and admired by the world.

Grumeza's use of eyewitness testimonies, memoirs, and journalists' reports tell the story of the rise and reign of one of the most terrifying dictatorships of all time. The book illustrates how the historical, political, economic, and ideological factors at the time, coupled with Hitler's own personal appeal, allowed him to create a deadly war-machine while the rest of the world stood idle.

Grumeza's comprehensive account addresses these issues from a long avoided perspective, one that focuses on Hitler's achievements and the excitement of the German people and most of the world. The text and pictures provide insight on how Hitler's mostly bloodless Nazi revolution transformed into a gruesome reign of genocide and war, and how this relates to terrorism today.