12" x 18.5" x 7" Scale: 1/72
Fully-assembled desktop replica, hand-carved and hand-painted, scaled and highly-detailed. Comes with wooden base stand, ready for you to customize with nose art, tail markings and a custom plaque on the base to honor your WWII hero that served aboard them. 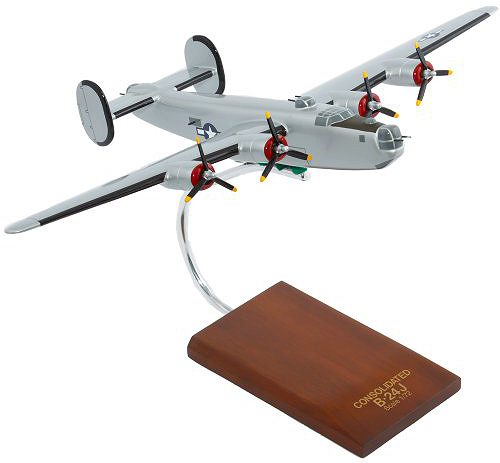 18,482 B-24 Liberators were built by the end of the war, making it the most-produced US military aircraft of World War Two. It served war in the Pacific, Middle Eastern, European and African theaters and gained a record in its action.

The B-24J Liberator is one of the variants of the liberators and the largest amount of Liberators ever produced. All in all 6,678 B-24Js were produced. The aircraft is somewhat similar to the B-24G and H models. The only difference between the B-24J and the two models is the autopilot and bombsight feature. The defensive modifications completed in the B-24H were not included in the B-24J model. The B-24J has an improved Type C1 autopilot and an M-1 series bombsight.

In 1944, the Army predicts a lesser amount of demands for Liberators. They regulated that the three plants be freed up for new purposes. In 1945, only Ford-Willow Run and Convair-San Diego continued developing B-24 aircrafts.