Paperback (320 pages), kindle
Go well beyond the famous raid of August 1, 1943 and examine the entire 1944 strategic campaign that all but knocked Ploesti out of the war and denied the German war machine the fuel it so desperately needed. 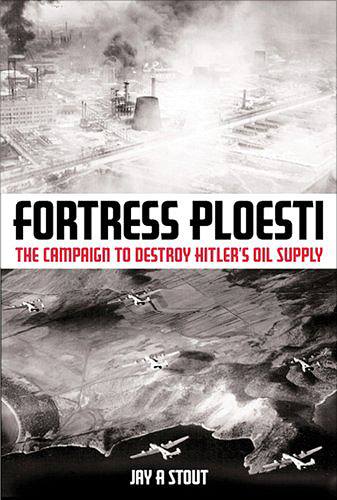 Unlike previous books on Ploesti, Jay Stout goes well beyond the famous big and bloody raid of August 1, 1943 and depicts the entire 1944 strategic campaign of twenty-plus missions that all but knocked Ploesti out of the war and denied the German war machine the fuel and lubricants it so desperately needed.

While Fortress Ploesti is the narrative history of the entire air campaign to deny the Ploesti oil complex to the Axis powers, it is also a launching point for the author's inquiries into many aspects of the American strategic bombing effort in World War II. It delivers across the board.

Stout, who served as a Marine F/A-18 pilot in the First Gulf War, asks questions about aviation combat history and technique that any modern combat pilot would be dying to ask. He carries the ball far beyond the goal post set by all other Ploesti historians. He has gone out of his way to describe the defenses throughout the campaign, and he brings in the voices of Ploesti's defenders to complement the tales of Allied airmen who brought Ploesti to ruin. He describes the role of the bombers, as well as that of the fighters, the ant-aircraft defenses, even the technique of obscuring the Ploesti complex with smoke.

In the end, Stout's narrative describes the entire Ploesti effort for the very first time in print, and, by proxy, guides the reader through the intricacies of the entire Allied strategic bombing campaign in Europe, and all the weapons and techniques the Axis powers used to parry it. His lucid presentation of complex issues at the tactical and strategic levels is impressive.

Jay Stout's previous books include Hornets Over Kuwait, his Gulf War memoir and, as co-author, The First Hellcat Ace.