Paperback (32 pages), kindle
The magnitude of the tragic loss of Lt Gen Andrews to the Allied war effort was characterized by Gen George Marshall by describing him as one of the nation’s "few great captains." 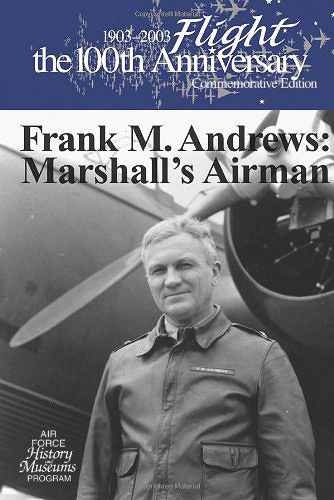 General Frank M. Andrews was an inspirational figure in our history and it is fitting that we highlight his accomplishments and contributions in the creation, shaping, and development of the United States Air Force.

As the organizer and commander of the prewar General Headquarters (GHQ) Air Force, he was the first airman to have centralized nationwide command of Air Corps bombardment, attack, and pursuit units. The advent of GHQ Air Force marked one of the first decisive steps on the road to the birth of a separate air service. Nevertheless, likely due to his personal modesty and untimely death in a B-24 crash in, May 1943, while commanding the European Theater of Operations, he has been a background figure in our history.

General George C. Marshall, wartime Chief of Staff of the Army, captured the magnitude of his tragic loss to the Allied war effort by characterizing Andrews as one of the nation’s "few great captains." Memorializing General Andrews is one example of how we can commemorate the Centennial of Flight, emphasizing the tremendous impact an individual’s efforts and contributions can have on aviation and the Air Force.