Paperback (323 pages), kindle
Hitler counted on Franco's friendship, yet was out-negotiated by the Spanish dictator who masterfully tap-danced around all Nazi demands. 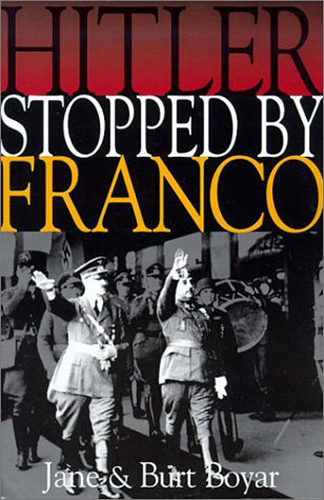 The amazing, untold story of how Generalisimo Francisco Franco, leader of the weakest nation in Europe, out-negotiated Adolf Hitler and aided the Allies in winning World War II. The Nazis had 20 Divisions of Wehrmacht at Spain’s border in the Pyrenees, planning to travel down the coast, take Gibraltar and close the Mediterranean to British shipping, forcing England to supply herself by the long route through the U-boat infested Atlantic.

Hitler counted on Franco's friendship. Yet despite the Nazi war machine’s "gun at his head" Franco held the German troops and tanks at bay, meanwhile infuriating Hitler by quickly bringing 40,000 European Jews with no money or passports into the safety of Spain.

"However general history may judge Franco... Jews should honor and bless the memory of this great benefactor of the Jewish people... who neither sought nor reaped any profit in what he did." From a 4 page obituary in The American Sephardi Journal of the Sephardic studies Program of Yeshiva University, Vol. IX, 1978.