The Battle of Kwajalein Atoll

Paperback (118 pages)
A uniquely written account of a WWII battle when a platoon of soldiers was interviewed as a group just fresh from the front lines of the Battle of Kwajalein Atoll. 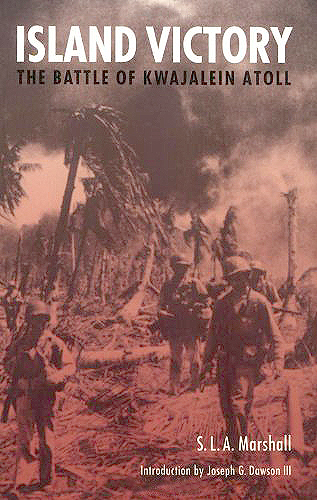 An on-the-spot history of a fight in the Pacific during World War II, Island Victory was the first battle history written by then–Lieutenant Colonel S. L. A. Marshall, a veteran of World War I who would serve in Korea and Vietnam and become a brigadier general in the process.

After the Seventh Infantry Division drove across Kwajalein Atoll in the first days of February 1944, successfully wresting control of the strategic southern tip from the Japanese, Marshall was charged with producing an accurate and comprehensive account of the fight. His solution: bring the front-line soldiers together at once and interview them as a group, tapping the collective memory of a platoon fresh from battle.

In this book, readers get a rare, firsthand sense of all the emotions that soldiers in combat experience. Numerous maps and photographs help us visualize precisely what took place. A compelling work of military history, and the first book of its kind, Island Victory is itself an important chapter in the history of how military exploits are described and recorded.