Lend-Lease Aid to the USSR in World War II

Hardcover (186 pages), paperback
"The United States is a country of machines. Without the use of these machines through Lend-Lease, we would lose this war." —Josef Stalin, 1943 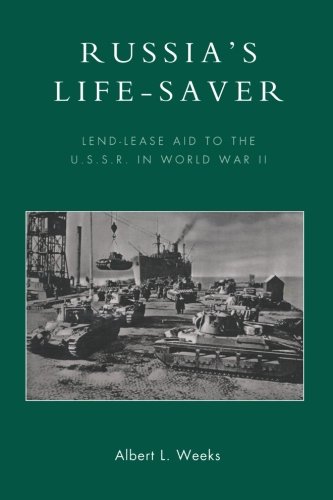 The United States shipped more than $12 billion in Lend-Lease aid to Stalin's Russia during World War II. Materials lent, beginning in late 1941 before the Japanese attack on Pearl Harbor, included airplanes and tanks, locomotives and rails, construction materials, entire military production assembly lines, food and clothing, aviation fuel, and much else. Lend-Lease is now recognized by post-Soviet Russian historians as essential to the Soviet war effort. Wielding many facts and statistics never before published in the U.S., author Albert L. Weeks keenly analyzes the diplomatic rationale for and results of this assistance. Russia's Life-Saver is a brilliant contribution to the study of U.S.-Soviet relations and its role in World War II.