The American Side of a Bridge Too Far

Paperback (512 pages), kindle, audiobook
Operation Market Garden, a most ambitious invasion and an immense, daring offensive to defeat Nazi Germany before the end of 1944. The Germans, however, proved much stronger than the Allies anticipated. 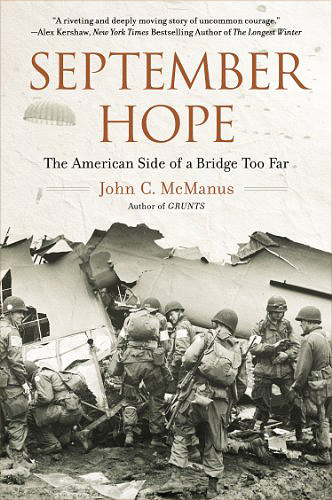 August 1944 saw the Allies achieve more significant victories than in any other month over the course of the war. The Germans were in disarray, overwhelmed on all fronts. Rumors swirled that the war would soon be over.

On September 17, the largest airborne drop in military history commenced over Holland—including two entire American divisions, the 101st and the 82nd. Their mission was to secure key bridges at such places as Son, Eindhoven, Grave, and Nijmegen until British armored forces could relieve them. The Germans, however, proved much stronger than the Allies anticipated. In eight days of ferocious combat, they mauled the airborne, stymied the tanks, and prevented the Allies from crossing the Rhine.

September Hope conveys the American perspective like never before, through a vast array of new sources and countless personal interviews to create a truly revealing portrait of this searing human drama.