DVD, Blu-ray
The bloodiest battle in human history. This film depicts the turning point in WWII as a vast tableau of horror in which the average German soldier was as much a victim of Nazi evil as the Soviet people. 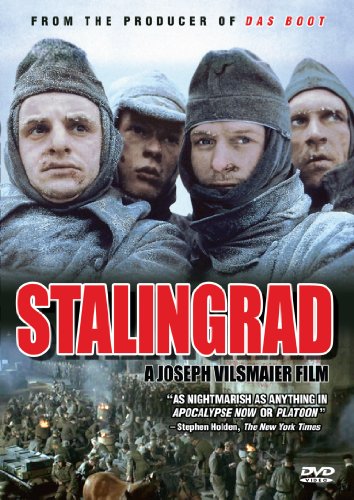 To gain an understanding of what transpired in the Battle of Stalingrad, the bloodiest battle in human history, this film certainly delivers. Its disturbing power comes through in its portrayal of horrific decapitations, amputations, grizzly deaths, and mutilations. Nothing is gratuitous, however.

Director Joseph Vilsmaier pulls us into the trenches with men, German and Russian alike, who are no different from soldiers on any side in any war. Stalingrad is packed with tension, and the battle sequences are startlingly realistic, but it's the inescapable message of the horror of war that lingers.

In the spring of 1942, German troops advanced deep into the Soviet Union en route to Stalingrad. Hitler seriously misjudged the tenacity of the Red Army and was convinced that the city could be conquered before winter. Ordinary foot soldiers, inadequately clothed and without sufficient food, struggled just to stay alive. Abandoned by their leaders, Nazi troops froze and starved to death in a conflict that left over one million dead.

Stalingrad graphically depicts this turning point in World War II as a vast tableau of horror in which the average German soldier was as much a victim of Nazi evil as the Soviet people. It's tempting to call this harrowing picture a World War II version of All Quiet on the Western Front: both films take the perspective of ordinary German soldiers at ground level.

Stalingrad surveys the misery of the battle of Stalingrad, the winter siege that cost the lives of almost one and a half million people, Russian defenders and German invaders alike. Not unlike Spielberg's approach to Saving Private Ryan, German director Joseph Vilsmaier rarely steps outside the action to comment on the higher purpose of the war, assuming the audience is aware of the evil of the Nazi regime. Instead, we simply follow a group of soldiers as they endure a series of gut-wrenching episodes, events which have the tang of authenticity and horror. Vilsmaier has a taste for symbolism and surreal touches, which only add to the unsettling sense of insanity this movie conjures up so well. --Robert Horton