Paperback (576 pages), kindle, audiobook
A close study of America's military leaders for three decades, and the widening gulf between performance and accountability among the top brass of the US military. 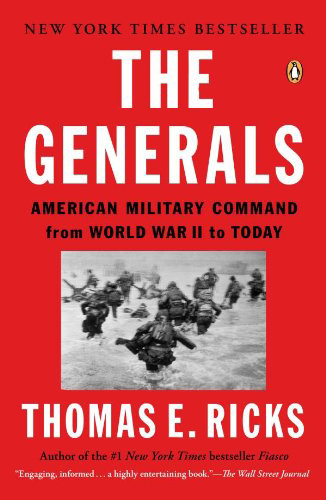 An epic history of the decline of American military leadership from the #1 bestselling author of Fiasco.

Thomas E. Ricks has made a close study of America’s military leaders for three decades, and in The Generals, he chronicles the widening gulf between performance and accountability among the top brass of the U.S. military. While history has been kind to the American generals of World War II, Marshall, Eisenhower, Patton, and Bradleyit has been less kind to others, such as Koster, Franks, Sanchez, and Petraeus.

Ricks sets out to explain why that is. We meet great leaders and suspect ones, generals who rose to the occasion and generals who failed themselves and their soldiers. In Ricks’s hands, this story resounds with larger meaning: about the transmission of values, about strategic thinking, and about the difference between an organization that learns and one that fails.