1944, DVD
The classic WWII propaganda documentary that offers a revealing look at the manner in which our government set out to kindle the fires of patriotism among African-Americans. 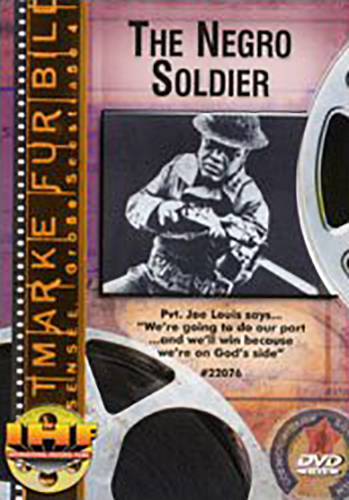 Produced by FRANK CAPRA for The WarDepartment. This classic World War II propaganda documentary offers a revealing look at the manner in which our government set out to kindle the fires of patriotism among African-Americans. It is set in a black church whose preacher tells his flock that the Nazis are determined to kill Negroes just as they slaughter Poles, Slavs, Czechs and Russians.

There is not a man alive who does not know of the crimes of (Hitler, Mussolini and Tojo). The minister spotlights the role of the Negro in American history. Blacks served with Washington at Valley Forge and fought in the Spanish-American War and World War I. The preacher cites such renown black Americans as Joe Louis, Booker T. Washington and George Washington Carver. He talks of how black athletes such as Jesse Owens and Ralph Metcalfe bested Germans and Japanese in the 1936 Olympics.

However, the films glaring omissions are what make it so historically arresting. There is not a single mention of the word slavery. Nor is there talk of the Ku Klux Klan or the lynching of black Americans. Nor is there acknowledgment that the American military of 1944 was segregated and that the American nation of 1944 was separate and unequal for the vast majority of blacks. Major league ballfields were still for whites only. In Hollywood films most blacks were mammies or janitors who only knew how to fracture the English language. At the same time the concept portrayed in the film -- that blacks and whites have much in common as Americans -- does promote, however unintentionally, the idea of integration.

NOTE: This DVD is published under license from Video Yesteryear - Plain Case - NO ARTWORK