The Wit and Wisdom of Winston Churchill:

A Treasury of More than 1000 Quotations

Paperback (258 pages), kindle
The timely and amazing Sir Winston Churchill was perhaps the greatest statesman in history and a master wordsmith to boot, both in phrasing the serious as well as the absurd. 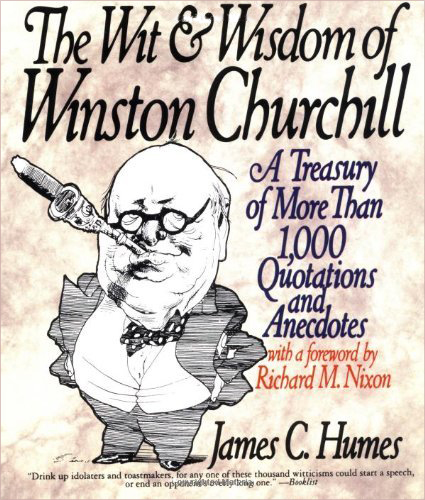 An extremely entertaining compendium of bon mots, anecdotes, and trivia about Winston Churchill from a leading Churchill lecturer and performer -- useful for speakers, students, of history, and World War II buffs, as well as general readers.

Sir Winston Churchill was perhaps the most notable statesman in history. He was one of the few statesmen who occupied both the world of thought and the world of action.
Among Churchill's quotable quotes...

"If Hitler invaded Hell I would make at least a favourable reference to the Devil in the House of Commons."

"A prisoner of war is a man who tries to kill you and fails, and then asks you not to kill him."

"A lie gets halfway around the world before the truth has a chance to get its pants on."

"This report, by its very length, defends itself against the risk of being read."

"History will be kind to me, for I intend to write it."

Some quotes regarding Churchill...

"It is enough of a claim to historic greatness for a man to have saved his own country. Winston Churchill may have saved civilization." - Thomas Sowell

"Alone among his contemporaries, Churchill did not denounce the Nazi empire merely as a threat, actual or potential, to the British Empire. Nor did he speak of it as a depraved but possibly useful ally. He excoriated it as a wicked and nihilistic thing. That appears facile now, but was exceedingly uncommon then." - Chistopher Hitchens

"He mobilized the English language and sent it into battle." - Edward R Murrow

Nancy Astor: "Sir, if you were my husband, I would give you poison."
Churchill: "If I were your husband I would take it."