(1966) DVD
A Blake Edwards signature stylish slapstick! A by-the-book US Captain is ordered to capture a strategic village in Italy and finds the soldiers are willing to surrender if the can have their annual wine festival first. 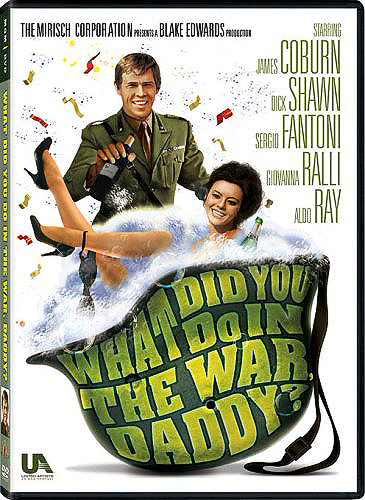 Set against the backdrop of WWII in 1943, a by-the-book Captain (Dick Shawn) is ordered to capture a strategic village in Italy and finds the soldiers are willing to surrender if the can have their annual wine festival first, a bacchanal that leaves both sides wasted.. But he must make it look like a real fight for the aerial viewers and the practice makes for loads of fun! The troops are forced to work together to stage a mock battle to satisfy American and German forces that are close by.

Neither cynical like The Americanization of Emily nor absurd like King of Hearts, this 1966 comedy directed by Blake Edwards (The Pink Panther) and scripted by William Peter Blatty (The Exorcist) is a carefree romp.

Collateral pleasures include Edwards’ signature stylish slapstick, Carroll O’Connor as a blustery general, James Coburn as the cool-under-fire Lieutenant Christian, Harry Morgan as an intelligence officer who gets lost in the village catacombs and goes mad, and the ravishingly beautiful Giovanna Ralli as the village Mayor’s very pliant daughter.

"War is hell," the DVD box proclaims, "and isn’t it fun?" Not really, but that shouldn't mar your enjoyment of one of Edwards' lesser-known films that is ripe for rediscovery.