A History of Freedom

DVD - 3 discs
Join historian and classical scholar J Rufus Fears as he tells freedom's dramatic story from ancient Greece to our own day, exploring a concept so close to us we may never have considered it with the thoroughness it deserves. 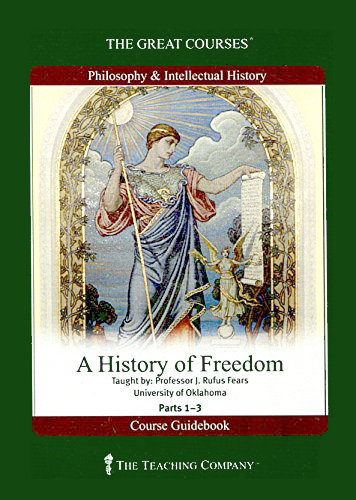 It's difficult to overstate the importance of these lectures

This 36-lecture course explores the history of freedom, from the birth of the idea of liberty in classical Greece to our own day. No idea in the history of the world has been more influential than freedom. This course deals with the political, economic, social, moral and cultural dimensions of freedom.

Professor J Rufus Fears (1945 - 2012) was an American historian, scholar, teacher, and author on the subjects of ancient history, the history of liberty, and the lessons of history. He is best known for his many lectures for the Teaching Company.

It can be argued that one simple idea-the concept of freedom-has been the driving force of Western civilization and may be the most influential intellectual force the world has ever known. But what is freedom, exactly?

Join historian and classical scholar J. Rufus Fears as he tells freedom's dramatic story from ancient Greece to our own day, exploring a concept so close to us we may never have considered it with the thoroughness it deserves.

In exploring what freedom meant to Abraham Lincoln, Robert E. Lee, Franklin Roosevelt, Winston Churchill, Martin Luther King, and other great historical figures, you'll probe a range of provocative issues related to a concept we in the 21st century sometimes take for granted. What does it take to be free, to have and to hold liberty? What role do the liberal arts and the world of the intellect play in the life of a free society or a free individual? How should we understand the relationship among freedom, religion, and morality?

With Professor Fears guiding and informing your thinking, you explore the birth of the idea of freedom in Greece and the story of the world's first democracy; the status and meaning of freedom in both the Roman Republic and the Empire; the role of Christianity in that flowering of freedom, and the Christian view of the true meaning of human liberation; the debates about freedom that informed the framing and ratification of the United States Constitution; its awful testing on the battlefields of the Civil War; the struggles of free peoples against domestic injustices and foreign dictatorships during the 20th century; and the questions about freedom we still face today.