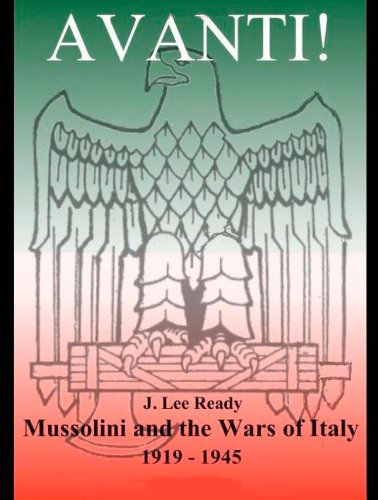 Internationally acclaimed historian J. Lee Ready has produced another monumental work. Avanti: Mussolini and the Wars of Italy. This book covers the Street War 1919-22, the Libyan War 1919-31, the Ethiopian War 1935-40, the Spanish Civil War 1936-39 and World War II. The book states opinions backed up by the author’s forty years of research and study. Mussolini was not executed by partisans, but was killed trying to escape. Italy emerged victorious in World War II. Italian troops were praised for their bravery on all fronts. Italian arms were highly efficient at times. Mussolini was the most popular leader in Italy in centuries, and also the most vilified. Italians were guilty of major war crimes, but were never punished by the Allies.

The author gives evidence for these statements and lets the reader make up his mind. Excerpts:

“In general Italian infantry performed well. Sometimes they panicked, but at other times their bravery was outstanding, such as on the Franco-Italian Border 1940, and in Greece, Egypt/Libya, Eritrea/Ethiopia, Tunisia, the Russian front, Sicily, Cassino, the crawl up the Italian boot and the battles of 1945 on both sides of the line.”

“The Russians saw no difference between Italian and German troops.”

“The Bersaglieri were elite and consistently good, showing great audacity. At Sidi Rezegh they reassured a nervous Rommel. At Kasserine Pass they worried the Americans. On the Russian front they sliced their way through Russian hordes.”

“On Corsica the French insisted on keeping their Italian artillery in action.”

“When the veterans of the US 88th Division ran up against the Italians they described them as ‘elite’.”

“The Royal Navy had a healthy respect for the Italian Navy.”

“The American experience of fighting against Italians was gained in Tunisia, Sicily and Italy, where they encountered courageous opposition.”

“British generals described Allied Italian units as ‘invaluable’, ‘exceeded expectations’, ‘the bravery of the Italian troops in action is beyond question’, ‘they are paying a very worthwhile dividend’, ’morale in these groups is very high’.”

“American generals described Allied Italian units as ‘valuable, without which US Fifth Army could not have operated’.”

“Without Italian military efficiency there would have been no victory at Teruel, no destruction of British armor in the desert, no charge across Russia, no impressive last stands at Keren, Amba Alagi, Alamein or Enfidaville, and no partisan uprising.”

“But decent leadership, such as provided by the Duke D’Aosta, Lorenzini, Nasi, Utili, Bergonzolli and Messe, was all too rare.”

“Mussolini’s invasion of Albania taught a predominantly Moslem people the meaning of Christianity by invading and conquering them on Easter weekend!”

“Much of Moslem Libya’s attitude to the world can be attributed to their treatment at the hands of the Christian Italians.”

“Did the civilians of Barcelona really die because their love of their Catalonian homeland threatened Italy, or because Mussolini wanted to impress the world with his new airplanes?”

“Prior to Mussolini the only hope for a poor farm worker was to emigrate.”

“[Mussolini] gave Italy a boom economy that helped her sail through the Great Depression practically unharmed.”

“in Mussolini’s Italy the nobility slept like babes with the assurance that their privileges would still be there in the morning.”

“he bought off the Roman Catholic Church with the greatest gift of all: he gave the church its own country, the Vatican.”

“he whittled down the nation’s major criminal families, including the ‘Mafia’ in Sicily.”

“he created an air force that was the envy of the world, with Italian pilots as popular in the public imagination as race car drivers.”

Controversial and opinionative as all good histories should be, this book, Avanti, should be considered a standard work in Italian history and the story of World War II.