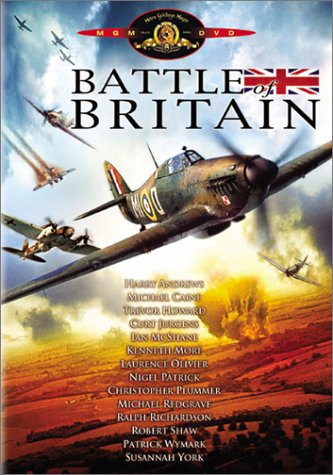 What makes Battle of Britain an essential WWII movie?

Telling the story of the greatest air battle in history, one that Britain won only because Hitler didn't know how close the RAF had come to complete destruction, is important from an historical standpoint. Add to it the fact that the cinematography is absolutely magnificent, as are the dog fighting sequences of so many carefully restored vintage Spitfires and Hurricanes, and a number of German aircraft as well.

Featuring a "big stellar cast" (Variety), including Michael Caine, Trevor Howard, Laurence Olivier, Christopher Plummer, Michael Redgrave, Robert Shaw, Susannah York and Edward Fox, Battle of Britain is a spectacular retelling of a true story that shows courage at its inspiring best. Few defining moments can change the outcome of war. But when the outnumbered Royal Air Force defied insurmountable odds in engaging the German Luftwaffe, it may well have altered the course of history! There's something about this film that's so irresistible, despite its grandiose manipulation. Maybe because it recounts the greatest air battle in history, achieving the greatest aerial battle in film history. Maybe because it has such a terrific cast (Harry Andrews, Michael Caine, Trevor Howard, Curt Jurgens, Laurence Olivier, Nigel Patrick, Christopher Plummer, Michael Redgrave, Ralph Richardson, Robert Shaw, Patrick Wymark, and Edward Fox). Maybe because it's so technically well-made, thanks to the Bond team of producer Harry Saltzman and director Guy Hamilton and the great cinematographer Freddie Young. Or maybe because there is something truly riveting about watching the British kick the Nazis back to Germany. --Bill Desowitz

The Battle of Britain...