Paperback (384 pages)
His WWII cartoons depict American soldiers, as represented by the archetypal characters "Willie and Joe," two weary and bedraggled infantry troopers who stoically endure the difficulties and dangers of duty in the field. 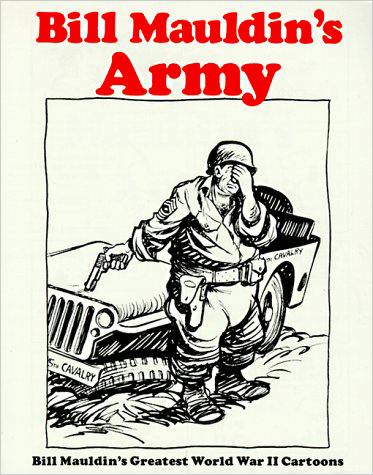 While in the 45th Infantry Division, Mauldin volunteered to work for the unit's newspaper, drawing cartoons about regular soldiers or "dogfaces". Eventually he created two cartoon infantrymen, Willie (who was modeled after his comrade and friend Irving Richtel) and Joe, who became synonymous with the average American GI.

In his cartoons Mauldin battled injustice and pretense with irony and humor, not only through his drawings but also his captions. Of course, as the cover shot of the soldier about to shoot his broken jeep amply evidences, he did not always need the captions. Other times the caption carries the cartoon, as when Willie and Joe are huddled in the snow and asking, "Remember the warm soft mud last summer?" Another classic shows an exhausted infantryman standing in front of a table where medals were being given out, saying: "Just gimme th' aspirin. I already got a Purple Heart."