The Life of Gregory "Pappy" Boyington

Paperback (512 pages), kindle
Black Sheep One is the first biography of legendary warrior and WWII hero Gregory "Pappy" Boyington. When the shooting stopped, the stubbornly independent Boyington lived a life that went beyond what even the most imaginative might have expected. 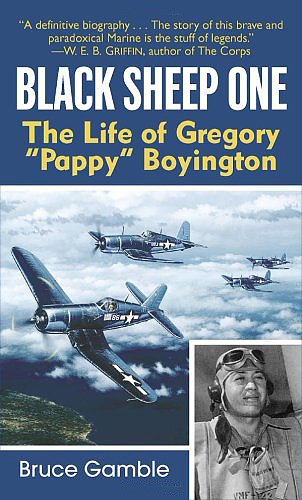 Black Sheep One is the first biography of legendary warrior and World War II hero Gregory Boyington. In 1936, Boyington became an aviation cadet and earned the "wings of gold" of a naval aviator. After only a short period on active duty, however, he was "encouraged" to resign from the Marine Corps due to his unconventional behavior. Remarkably, this inauspicious beginning was just the prologue to a heroic career as an American fighter pilot and innovative combat leader.

With the onset of World War II, when skilled pilots were in demand, he became the commander of an ad hoc squadron of flying leathernecks. Led by Medal of Honor winner Boyington, the legendary Black Sheep set a blistering pace of aerial victories against the enemy.

Though many have observed that when the shooting stops, combat heroes typically just fade away, nothing could be further from the truth for Boyington. Blessed with inveterate luck, the stubbornly independent Boyington lived a life that went beyond what even the most imaginative might expect. Exhaustively researched and richly detailed, here is the complete story of this American original.