Hardcover (400 pages), kindle
Over 1,000 depression-era civilian contractors came to remote Wake Island in 1941 to build an air station only to find themselves in the Alamo of the Pacific. 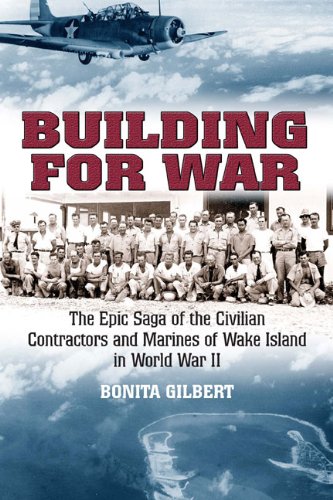 This intimately researched work tells the story of the thousand-plus Depression-era civilian contractors who came to Wake Island, a remote Pacific atoll, in 1941 to build an air station for the U.S. Navy. Author Gilbert charts the contractors' hard-won progress as they scramble to build the naval base as well as runways for U.S. Army Air Corps B-17 Flying Fortresses while war clouds gather over the Pacific.

Five hours after their attack on Pearl Harbor, the Japanese struck Wake Island, which was now isolated from assistance. The undermanned Marine Corps garrison, augmented by civilian-contractor volunteers, fought back against repeated enemy attacks, at one point thwarting a massive landing assault. The atoll was under siege for two weeks as its defenders continued to hope for the U.S. Navy to come to their rescue. Finally succumbing to an overwhelming amphibious attack, the surviving Americans, military and civilian, were taken prisoner. While most were shipped off to Japanese POW camps for slave labor, a number of the civilians were retained as workers on occupied Wake. Later in the war the last ninety-eight Americans were brutally massacred by their captors. The civilian contractors who had risked distance and danger for well-paying jobs ended up paying a steep price: their freedom and, for many, their lives.

Written by the daughter and granddaughter of civilians who served on Wake Island, Building for War sheds new light on why the United States was taken by surprise in December 1941 and shines a spotlight on the little-known, virtually forgotten story of a group of civilian workers and their families whose lives were forever changed by the events on the tiny atoll that is Wake.

Bonita Gilbert has an MA in history from the University of Oregon and teaches history at North Idaho College. Bonnie and her husband live in Coeur d'Alene, Idaho.

"...is a fine addition to the literature of the pre-war Pacific, giving an insight into the relative late and haphazard preparations by the United States to fortify and upgrade its island possessions. But it adds an important human element - the story of the civilian contractors trapped on an island in a war for which they never signed up." Robert Hanyok, Pacific War Historian

Wake Island - the Alamo of the Pacific...