Dawn of the Rising Sun:

Why Did Japan Declare War on the World?

Paperback (376 pages)
Japan felt she had missed out on her chance for global expansion, and, during the 1920s and 1930s, a militaristic tone permeated, leading to attacking the Western Powers. 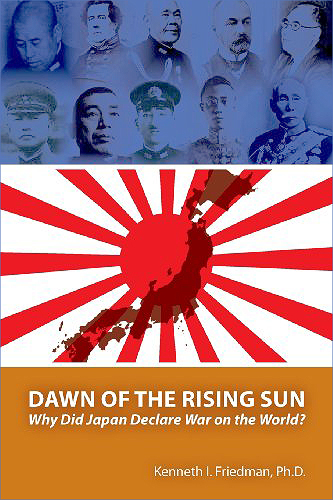 Using painstaking research and gifted insight, Dr. Kenneth I. Friedman, a talented and meticulous historian and writer, investigates the reasons why Imperial Japan declared war on the US, the British Empire, and other Western powers during World War II. Dr. Friedman’s probing and in-depth analysis traces almost a century of US–Japan relations in this epic and stylish quest to provide a comprehensive and easy-to-read analysis offering detailed, historically accurate answers.

The book begins with the arrival of American Commodore Matthew Perry in 1853, passes through the Meiji Restoration between 1868–1912, the Russo-Japanese War (ending in 1905 via the treaty signed at Theodore Roosevelt’s “Summer White House” at Oyster Bay, Long Island), Japan’s entry in World War I that ended with the Treaty of Versailles in 1919, the Japanese operational, strategic and tactical push into Northeast and Southeast Asia, and eventually heads through the clouds for the airstrike on Pearl Harbor, Hawaii, and thus usher in America’s entry into a global war waxed rich with global aims.

In his third book about World War II, Friedman crafts an historical narrative telling the story of Japan's march to an Armageddon that ended in fire and smoke. His sophisticated analysis captures the intrigues, drama, and geopolitical maneuvering which eventually led Japan to attack the US. The genesis of Dr. Friedman’s analysis offers the true story of Japan as a star-crossed nation during its evolution from a country content to stay in its relatively peaceful isolation from the rest of the world to becoming a de facto world power on a collision course with destiny.

Dawn of the Rising Sun addresses the Japanese reasons for attacking the Western Powers on December 7, 1941. Almost all of the analysis comes from the Japanese perspective. Various Japanese sources are used and explained to offer a broad cultural background and context. Conversations between Japanese and Western leaders have been based on source material in an effort to augment some of the most dramatic moments in world history.

Taking a long-view of the emerging balance of power between Japan and America, Dr. Friedman focuses on the arrival of Perry and Harris in the 1850s, the downfall of the Shogunate rule ending in 1868, Japan making war with and defeating China at the end of the 19th Century, steadily disposing of Czarist Russia, and the awakening of the Japanese colonial spirit to see colonies overseas were the major events that propelled Japan to attacking the Americans.

Japan felt she had missed out on her chance for global expansion, and, during the 1920s and 1930s, a militaristic tone permeated Japanese domestic and foreign policy in an effort to safeguard her imperialistic gains on the Asian continent. Cut off from oil by America, Japan believed it had no choice but to attack the Hawaiian Islands and other American, Dutch, and British possessions in the Western Pacific.

The path of Japan from feudalism to a modern hyper power with state-of-the art weaponry is brought to life with stunning detail with more than fifty maps, charts, and graphics as well as numerous photographs. World War II drew Japan into an alliance with Nazi Germany and pushed Imperial Japanese forces into India and onto the fringes of Australia.

Why did these events happen? Readers will continue turning the pages from one fabulous set of facts and intrigues to the next as Friedman hits yet another home run in his stunning troika of World War II works.