Fight to the Last Man

Paperback (720 pages), kindle
A bold and powerful account of the small group of men who fended off the German army so that hundreds of thousands of their comrades could exit this doomed land. 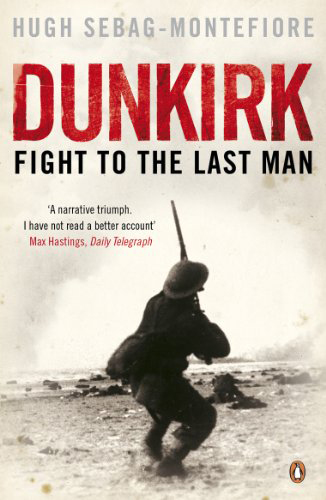 In May of 1940, the armies of Nazi Germany were marching through France. In the face of this devastating advance, one of World War II’s greatest acts of heroism would be a retreat: the evacuation of the British Army from Dunkirk.

In Dunkirk: Fight to the Last Man, we are given an unprecedented vision of these harrowing days. Hugh Sebag-Montefiore has created a bold and powerful account of the small group of men who fended off the German army so that hundreds of thousands of their comrades could exit this doomed land. These brave troops, members of the British Expeditionary Forces and the French army, held a series of strong points inland, allowing the rest of the battered battalions to escape to the coast. Those that remained were ordered to fight to the last man.

Much has been written about the efforts of the Royal Navy in shuttling soldiers to safety, but here we are given an unparalleled look inside this massive operation and the invaluable role played by the BEF. Without the ferocity and bravery of the officers and ordinary soldiers on the ground, the German army would likely have encircled nearly half a million Allied soldiers. The loss of these battalions, Sebag-Montefiore argues, could have dramatically changed the direction of the war, and enabled Hitler to invade a weakened Britain.

This is military history at its best: a judicious analysis of the movement of the war, and a vivid feel of what it was like to be on the front line. Sebag-Montefiore brings these men—the forgotten heroes of Dunkirk—to life, and it is their valiant exploits and devotion to their brethren that form the heart of this important book.