Japan in the Wake of World War II

Hardcover (688 pages), paperback, kindle, audiobook
Where America's war against Japan lasted less than 4 years, Japan had been fighting for 15 and was left in ruins. The collapse of Japan's authoritarian state enabled America's six-year occupation to set Japan in entirely new directions. 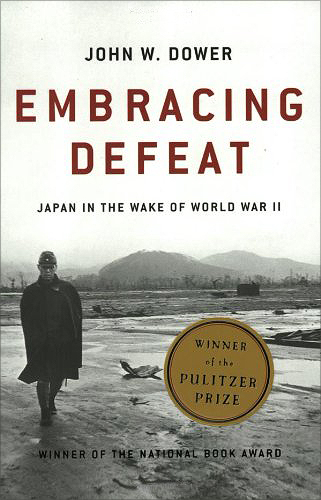 Winner of the Pulitzer Prize, the 1999 National Book Award for Nonfiction, finalist for the Lionel Gelber Prize and the Kiriyama Pacific Rim Book Prize, Embracing Defeat is John W. Dower's brilliant examination of Japan in the immediate, shattering aftermath of World War II.

Drawing on a vast range of Japanese sources and illustrated with dozens of astonishing documentary photographs, Embracing Defeat is the fullest and most important history of the more than six years of American occupation, which affected every level of Japanese society, often in ways neither side could anticipate. Dower, whom Stephen E. Ambrose has called "America's foremost historian of the Second World War in the Pacific," gives us the rich and turbulent interplay between West and East, the victor and the vanquished, in a way never before attempted, from top-level manipulations concerning the fate of Emperor Hirohito to the hopes and fears of men and women in every walk of life. Already regarded as the benchmark in its field, Embracing Defeat is a work of colossal scholarship and history of the very first order. John W. Dower is the Elting E. Morison Professor of History at the Massachusetts Institute of Technology. He is a winner of the National Book Critics Circle Award for War Without Mercy. 75 illustrations and map

tells the story of the transformation of Japan under American occupation after World War II. When Japan surrendered unconditionally to the Allied Forces in August 1945, it was exhausted; where America's Pacific combat lasted less than four years, Japan had been fighting for 15. Sixty percent of its urban area lay in ruins. The collapse of the authoritarian state enabled America's six-year occupation to set Japan in entirely new directions.

Because the victors had no linguistic or cultural access to the losers' society, they were obliged to govern indirectly. Gen. Douglas MacArthur decided at the outset to maintain the civil bureaucracy and the institution of the emperor: democracy would be imposed from above in what the author terms "Neocolonial Revolution." His description of the manipulation of public opinion, as a wedge was driven between the discredited militarists and Emperor Hirohito, is especially fascinating. Tojo, on trial for his life, was requested to take responsibility for the war and deflect it from the emperor; he did, and was hanged. Dower's analysis of popular Japanese culture of the period--songs, magazines, advertising, even jokes--is brilliant, and reflected in the book's 80 well-chosen photographs. With the same masterful control of voluminous material and clear writing that he gave us in War Without Mercy, the author paints a vivid picture of a society in extremis and reconstructs the extraordinary period during which America molded a traumatized country into a free-market democracy and bulwark against resurgent world communism. --John Stevenson