Paperback (536 pages), kindle
Twenty-nine German women from a wide spectrum of circumstances recall memories of life under the Third Reich. 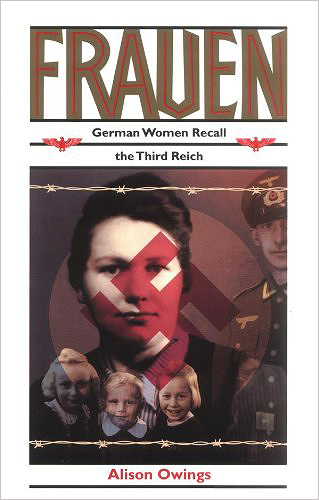 Twenty-nine German women recall memories of the Third Reich. What they have to say will surprise Americans, just as they surprised the women themselves. Not since Marcel Ophuls' controversial film The Sorrow and the Pity have we been on such intimate terms with "the enemy."

The author, a freelance television writer who is neither a German nor a Jew, has compiled and edited a groundbreaking set of oral histories. She interviews women from many spectrums of the Third Reich: Germans, Jews, individuals of "mixed" parentage, a countess, a camp guard, women who hid Jews, Nazi supporters, Communists, and other women who witnessed and participated in everyday and extraordinary events. Alison Owings has tried, as much as possible, to quote her interviewees directly yet still manages to create an even and engaging text.