The Story of USO Hostesses during WWII

Hardcover (272 pages), kindle
Each Saturday night, thousands of servicemen and USO hostesses happily forgot the war for a little while as they danced together in USO clubs, which served as havens of carefree stability. 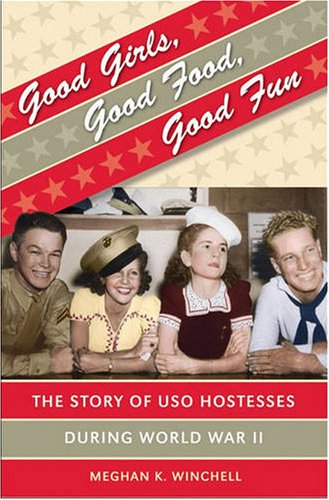 Throughout World War II, when Saturday nights came around, servicemen and hostesses happily forgot the war for a little while as they danced together in USO clubs, which served as havens of stability in a time of social, moral, and geographic upheaval. Meghan Winchell demonstrates that in addition to boosting soldier morale, the USO acted as an architect of the gender roles and sexual codes that shaped the "greatest generation."

Combining archival research with extensive firsthand accounts from among the hundreds of thousands of female USO volunteers, Winchell shows how the organization both reflected and shaped 1940s American society at large. The USO had hoped that respectable feminine companionship would limit venereal disease rates in the military. To that end, Winchell explains, USO recruitment practices characterized white middle-class women as sexually respectable, thus implying that the sexual behavior of working-class women and women of color was suspicious. In response, women of color sought to redefine the USO's definition of beauty and respectability, challenging the USO's vision of a home front that was free of racial, gender, and sexual conflict.

Despite clashes over class and racial ideologies of sex and respectability, Winchell finds that most hostesses benefited from the USO's chaste image. In exploring the USO's treatment of female volunteers, Winchell not only brings the hostesses' stories to light but also supplies a crucial missing piece for understanding the complex ways in which the war both destabilized and restored certain versions of social order.