The Ordeal And Triumph Of An American Infantry Regiment

Hardcover (270 pages), paperback
The "meat grinder" will become the longest battle on German ground during World War II and the longest single battle the US Army has ever fought. 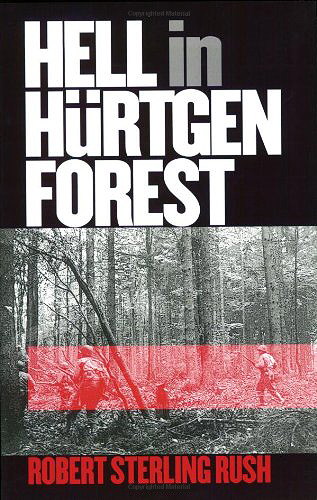 Some of the most brutally intense infantry combat in World War II occurred within Germany's Hürtgen Forest. Focusing on the bitterly fought battle between the American 22d Infantry Regiment and elements of the German LXXIV Korps around Grosshau, Rush chronicles small-unit combat at its most extreme and shows why, despite enormous losses, the Americans persevered in the Hürtgenwald "meat grinder."

On 16 November 1944, the 22d Infantry entered the Hürtgen Forest as part of the U.S. Army's drive to cross the Roer River. During the next eighteen days, the 22d suffered more than 2,800 casualties--or about 86 percent of its normal strength of about 3,250 officers and men. After three days of fighting, the regiment had lost all three battalion commanders. After seven days, rifle company strengths stood at 50 percent and by battle's end each had suffered nearly 140 percent casualties.

Despite these horrendous losses, the 22d Regiment survived and fought on, due in part to army personnel policies that ensured that unit strengths remained high even during extreme combat. Previously wounded soldiers returned to their units and new replacements, green to battle, arrived to follow the remaining battle-hardened cadre.

The German units in the Hürtgenwald suffered the same horrendous attrition, with one telling difference. German replacement policy detracted from rather than enhanced German combat effectiveness. Organizations had high paper strength but low manpower, and commanders consolidated decimated units time after time until these ever-dwindling bands of soldiers disappeared forever: killed, wounded, captured, or surrendered. The performance of American and German forces during this harrowing eighteen days of combat was largely a product of their respective backgrounds, training, and organization.

Rush's work underscores both the horrors of combat and the resiliency of American organizations. While honoring the sacrifice and triumph of the common soldier, it also compels us to reexamine our views on the requisites for victory on the battlefield.