The Nazi War Against Religion

Paperback (336 pages), kindle
The prominent Protestant pastor and outspoken Hitler foe who spent the last 7 years of Nazi rule in concentration camps is best remembered for his "First they came for..." poem. 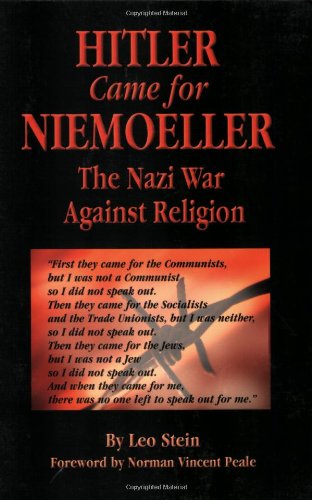 An account of Martin Niemoeller's face-to-face discussions with Hitler and the story of his eight-year imprisonment.

Martin Niemoller (1892-1984) was a prominent Protestant pastor who emerged as an outspoken public foe of Adolf Hitler and spent the last seven years of Nazi rule in concentration camps. He is perhaps best remembered for this quotation...

There are several variations of Niemoller's "First They Came" poem, some made longer to include other groups that "they" came for, but the impact is the same.

"To say that this is a good book is to say nothing. To advise one to read it for entertainment is sacrilege. To urge its reading for information, or even for inspiration, is to reveal a lack of insight. This book is a revelation of hell on earth, of the existence of a malignant wickedness and evil in this world. If any man can read it and not be stirred to his depths, it is because he has no depths."

-- Norman Vincent Peale, from the forword

Resistance from the Pulpit...