Hardcover (272 pages), kindle
The talent of the Third Reich's engineers not only buoyed the regime but allowed it to survive longer than would normally be expected. 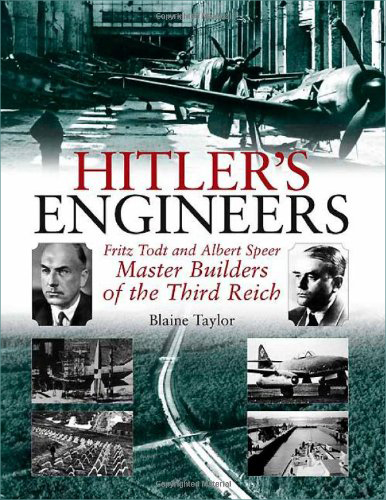 A selection of the Military Book Club copiously illustrated and carefully described, this is the first full treatment of two of the Third Reich's most important figures. While Nazi Germany's temporary ascendancy owed much to military skill, the talent of its engineers not only buoyed the regime but allowed it to survive longer than would normally be expected. This unique work focusing on Dr. Fritz Todt and Albert Speer, based on many previously-unpublished photographs and artwork from captured Nazi records, describes how engineering, as well as military skill, allowed the Third Reich to survive.

Dr. Todt was the brilliant builder of the world's first superhighway system (the Autobahn) that still exists today, as well as the architect of the German West Wall (Siegfried Line) that predated the later Atlantic and East Walls. The builder, also, of each of the wartime "Fuhrer Headquarters," as well as the submarine pens, Dr. Todt was killed in a still-mysterious airplane crash that may well have been a Nazi death plot, though he was given a State Funeral by Hitler,

Todt was succeeded in death as German Minister of Armaments and War Production by the Fuhrer's longtime personal architect (actually one of several), Albert Speer, who was credited by the Allies after the war as having prolonged the conflict by at least a year. Called a genius by Hitler himself, Speer designed and built the prewar Nuremberg Nazi Party Congress rally stands and buildings, many of which can still be visited.

More importantly, under the constant rain of Allied bombs and the encroachment of Soviet advances from the East, Speer managed to keep the German industrial machine running until the spring of 1945, though it was driven ever further underground. He also allocated resources to fortifications and counterattacks (the V-missile installations) against both West and East, in attempts to stave off defeat. Convicted as a war criminal at Nuremberg, Speer served his entire 20 year-long sentence at Spandau Prison, then went on to become a best-selling author as a Nazi apologist who died in London suddenly in the arms of his lover on Sept. 1, 1981, the anniversary of the German invasion of Poland.

Together, Todt and Speer were the pillars that supported the Third Reich throughout the vicissitudes of battlefield fortune. With over 300 photographs, this is the first work that examines their unique role in history's most terrible war.

BLAINE TAYLOR is the author of four previous photographic studies on the World War II era. The winner of six awards for writing and editing, he is a veteran of the US Army's 199th Light Infantry Brigade in Vietnam, and has 12 medals and decorations, including the Combat Infantryman's Badge. An international magazine writer, Mr. Taylor lives and works in Towson, Maryland.