Paperback (352 pages), kindle
Go beyond counterfactual "What if?" history and explore just how close the Allies were to losing the war. 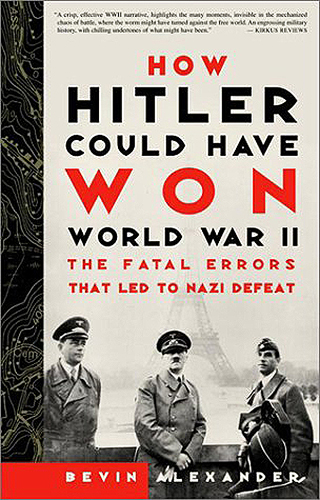 Most of us rally around the glory of the Allies' victory over the Nazis in World War II. The story is often told of how the good fight was won by an astonishing array of manpower and stunning tactics. However, what is often overlooked is how the intersection between Adolf Hitler's influential personality and his military strategy was critical in causing Germany to lose the war.

With an acute eye for detail and his use of clear prose, acclaimed military historian Bevin Alexander goes beyond counterfactual "What if?" history and explores for the first time just how close the Allies were to losing the war. Using beautifully detailed, newly designed maps, How Hitler Could Have Won World War II exquisitely illustrates the  important battles and how certain key movements and mistakes by Germany were crucial in determining the war's outcome. Alexander's harrowing study shows how only minor tactical changes in Hitler's military approach could have changed the world we live in today.

How Hitler Could Have Won World War II untangles some of the war's most confounding strategic questions, such as:
Why didn't the Nazis concentrate their enormous military power on the only three beaches upon which the Allies could launch their attack into Europe?
Why did the terrifying German panzers, on the brink of driving the British army into the sea in May 1940, halt their advance and allow the British to regroup and evacuate at Dunkirk?
With the chance to cut off the Soviet lifeline of oil, and therefore any hope of Allied victory from the east, why did Hitler insist on dividing and weakening his army, which ultimately led to the horrible battle of Stalingrad?

Ultimately, Alexander probes deeply into the crucial intersection between Hitler's psyche and military strategy and how his paranoia fatally overwhelmed his acute political shrewdness to answer the most terrifying question: Just how close were the Nazis to victory?

Why did Hitler insist on terror bombing London in the late summer of 1940, when the German air force was on the verge of destroying all of the RAF sector stations, England's last defense?

With the opportunity to drive the British out of Egypt and the Suez Canal and occupy all of the Middle East, therefore opening a Nazi door to the vast oil resources of the region, why did Hitler fail to move in just a few panzer divisions to handle such an easy but crucial maneuver?

On the verge of a last monumental effort and concentration of German power to seize Moscow and end Stalin's grip over the Eastern front, why did the Nazis divert their strength to bring about the far less important surrender of Kiev, thereby destroying any chance of ever conquering the Soviets?

From the Hardcover edition.Adolf Hitler rose to political prominence by quickly identifying his opponents' weaknesses and turning them to his advantage. As a military leader, however, he rarely exercised the same talent for exploiting weak spots. Instead, he threw the bulk of his armies against his enemies' strongest positions, sacrificing much-needed forces at Stalingrad and Tobruk, among other places.

Had he done otherwise, writes Bevin Alexander, Hitler might well have carried the day. His strategy until mid-1940 had been flawless, Alexander argues: "He isolated and absorbed state after state in Europe, gained the Soviet Union as a willing ally, destroyed France's military power, threw the British off the Continent, and was left with only weak and vulnerable obstacles to an empire covering most of Europe, North Africa, and the Middle East." After 1940, however, Hitler committed a legion of failures. Ignoring his field commanders' urging, he refused to commit armored divisions to seize the Suez Canal, which would have secured most of the Mediterranean and given the Third Reich easy access to oil. He diverted resources from the navy, allowing the Allies to gain control of the Atlantic Ocean and maintain nearly unbroken supply lines between the United States and Britain. And he weakened Germany's abilities to wage war by turning his armies' energies to carrying out the Final Solution. These and other miscalculations, Alexander suggests, cost the Reich many hard-won strategic advantages, and eventually any chance of victory.

Second-guessing history is an endeavor fraught with peril, and in any event, many historians have discounted the possibility that the Nazi regime could have emerged from global war undefeated. But Alexander's arguable exercise in counterfactuals soon gives way to a thoughtful, generally uncontroversial survey of the war in Europe, one that is of use to students of military history and tactics. --Gregory McNamee

Hindsight, of course, is always 20-20 and playing "armchair quarterback" after the game can never alter the past, but the urge to do so is alluring, even fun..

There were many turning points in World War II, such as the Allied victory in the Battle of Midway. But even if that battle had not unfolded as it did, the industrial might of the US would have eventually prevailed against Japan and the turning point in the Pacific would have occurred elsewhere and else-when. The same can be said for most any event or battle in the war.

However, two dates in particular could have done a lot more than merely alter the duration of the war, but could have changed things so completely as to have produced a different outcome, and thus altered the world in which we live today...