The mantra is as relevant today as it was then
Stamped "Keep Calm" on one side, "Carry On" on the other Genuine .925 sterling silver components, chain, and clasp Sterling silver disk pendant and crown charm each measure just under half an inch (12x12mm) Chain is wire-wrapped by hand to the spring-ring clasp for added security (no flimsy jump rings used) Necklace length: 20 inches. Handcrafted by San Diego-based Asilomar Works 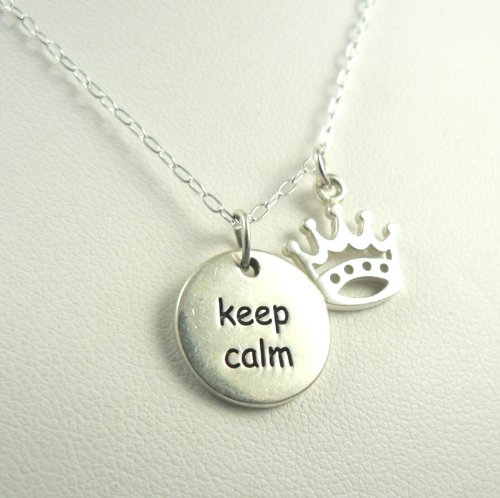 Upon the outbreak of World War Two, the British Government's Ministry of Information commissioned posters to be distributed throughout the country as a means of allaying public fear. Three different posters were produced and while the first two designs were widely distributed, the third poster, bearing the words 'Keep Calm and Carry On' along with the image of the royal crown, was held in reserve to be used only in times of extreme crisis. We think the mantra is as relevant today as it was then.