The Nazi Terror That Began the Holocaust

Paperback (128 pages), kindle
The violent attacks unleashed by the Nazis against the Jews that took place throughout Germany came to be known as Kristallnacht, the "Night of Broken Glass." The brutal assault came to an end, but it marked the beginning of something much worse: the Holocaust. 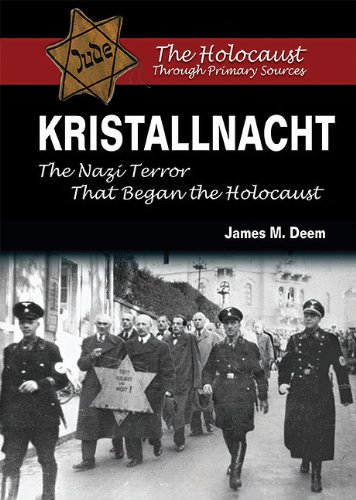 On November 10, 1938, Francis Schott slept peacefully in his bed. Suddenly, a group of Nazis broke into his house and began to destroy it. They wanted to demolish everything because Francis’s family was Jewish. For days, violent attacks like this took place throughout Nazi Germany and came to be known as Kristallnacht, the “Night of Broken Glass.” The Nazis destroyed thousands of Jewish homes and businesses, burned down hundreds of synagogues, and murdered many people. The brutal assault came to an end, but it marked the beginning of something much worse: the Holocaust.

It's very hard to explain Holocaust history to kids, but with politicians comparing each other to Hitler and "Holocaust" being used in so many different contexts, questions will come up.

This is an excellent resource for information about how the war against Jews began. It is well-written, well-illustrated, and very thoughtfully presented. it covers far more than just the night of Kristallnacht, but uses that as a starting point to explain that tragic time in history,