The Detroit Rioters of 1943

Paperback (329 pages)
The Detroit race riot of 1943 was the most devastating civil disorder in national history up to that time. It remains a powerful gauge by which other racial disorders can be measured. 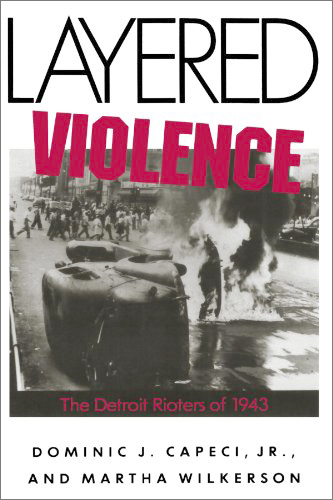 In two turbulent outbursts the city of Detroit has been subjected to civil disorder on a massive scale. The greatest of these occurred in 1967, but prior to this the Detroit race riot of 1943 was the most devastating civil disorder in national history. It remains a powerful gauge by which other racial disorders can be measured.

Who were the rioters? Why did they riot? In line with George Rude's call for scholars to identify "faces in the crowd," this valuable study describes and analyzes those individuals who rioted in Detroit during June of 1943 and outlines the causes for the riot. The authors draw upon never-before-used police records and court files and combine them with equally original archival data to present several profiles of those who filled the streets of Detroit during the bloody upheaval.

The authors find that rioters in 1943 included blacks and whites whose activities have much in common with those of earlier rioters and with prewar interracial and postwar commodity riots, which rarely occurred simultaneously, as they did in Detroit. Unlike other studies of riots, Layered Violence focuses on the identity and motives of the rioters, noting their many diversities, particularly of race, gender, class, and age. It distinguishes between participants of both races and ghetto dwellers who attacked white-owned property. Hence this study, culminating in a comparison of Detroit's conflagrations in 1943 and 1967, breaks new ground and provides a fresh prospective on past and recent racial bloodshed.

The authors' effective use of close focus on individual rioters reveals a distinct picture of collective violence from one generation of rioters to another as well as a distinct pattern by which violence occurred in layers as individuals entered, exited, and reentered battle zones for varying reasons.