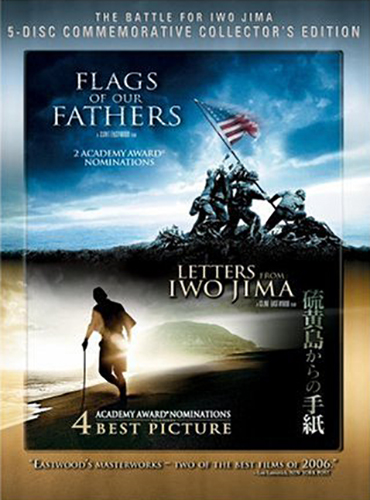 Flags of Our Fathers

Thematically ambitious and emotionally complex, Clint Eastwood's Flags of Our Fathers is an intimate epic with much to say about war and the nature of heroism in America. Based on the non-fiction bestseller by James Bradley (with Ron Powers), and adapted by Million Dollar Baby screenwriter Paul Haggis (Jarhead screenwriter William Broyles Jr. wrote an earlier draft that was abandoned when Eastwood signed on to direct), this isn't so much a conventional war movie as it is a thought-provoking meditation on our collective need for heroes, even at the expense of those we deem heroic. In telling the story of the six men (five Marines, one Navy medic) who raised the American flag of victory on the battle-ravaged Japanese island of Iwo Jima on February 23rd, 1945, Eastwood takes us deep into the horror of war (in painstakingly authentic Iwo Jima battle scenes) while emphasizing how three of the surviving flag-raisers (played by Adam Beach, Ryan Phillippe, and Jesse Bradford) became reluctant celebrities--and resentful pawns in a wartime publicity campaign – after their flag-raising was immortalized by Associated Press photographer Joe Rosenthal in the most famous photograph in military history.

As the surviving flag-raisers reluctantly play their public roles as "the heroes of Iwo Jima" during an exhausting (but clearly necessary) wartime bond rally tour, Flags of Our Fathers evolves into a pointed study of battlefield valor and misplaced idolatry, incorporating subtle comment on the bogus nature of celebrity, the trauma of battle, and the true meaning of heroism in wartime. Wisely avoiding any direct parallels to contemporary history, Eastwood allows us to draw our own conclusions about the Iwo Jima flag-raisers and how their postwar histories (both noble and tragic) simultaneously illustrate the hazards of exploited celebrity and society's genuine need for admirable role models during times of national crisis. Flags of Our Fathers defies the expectations of those seeking a more straightforward war-action drama, but it's richly satisfying, impeccably crafted film that manages to be genuinely patriotic (in celebrating the camaraderie of soldiers in battle) while dramatizing the ultimate futility of war. Eastwood's follow-up film, Letters from Iwo Jima, examines the Iwo Jima conflict from the Japanese perspective. --Jeff Shannon

The two-disc special edition of Flags of Our Fathers offers a fine balance of behind-the-scenes production features and archival history. Disc 1 is entirely dedicated to Clint Eastwood's acclaimed wartime drama, paired with an abundance of special features on disc 2. First up is a three-minute introduction by Clint Eastwood, who explains his attraction to James Bradley's nonfiction bestseller, how he partnered with Steven Spielberg to coproduce this ambitious production, and the themes of wartime valor and misguided celebrity that he wished to illuminate. Next, author Bradley recalls the process of seeing his book translated to film (including interview clips with screenwriters William Broyles Jr. and Paul Haggis) and his involvement with the production as an authoritative consultant. In the 20-minute featurette "Six Brave Men," the actors who played the celebrated Iwo Jima flag-raisers speak about their characters, how they fit into the history of Iwo Jima, and the responsibility of honoring their memories with historically accurate portrayals. "The Making of an Epic" is a 30-minute behind-the-scenes documentary covering all aspects of production, from the decision to film in Iceland (where black volcanic sand matched the barren beaches of Iwo Jima) to the individual contributions of key personnel, most notably cinematographer Tom Stern, editor Joel Cox, costume designer Deborah Hopper, the late, great production designer Henry Bumstead, and Eastwood's longtime casting director, the late Phyllis Huffman. (The making-of feature is dedicated to Bumstead and Huffman, who both succumbed to cancer shortly after production was completed.) "Raising the Flag" (running a little over three minutes) focuses on the cast and crew's meticulous re-creation of the second Iwo Jima flag-raising, demonstrating the reverent care with which each soldier's movements were duplicated in exacting detail. "Looking into the Past" is a nearly 10-minute assembly of 1945 newsreel footage, showing many of the actual events that were dramatized in Eastwood's film, and demonstrating the impressive efforts that went into making Flags of Our Fathers as authentic as it could possibly be. The 15-minute "Visual Effects" featurette provides a detailed analysis of Digital Domain's diligent efforts to achieve convincing photo-realistic images in the film's epic-scale battle sequences, home-front bond rallies, and other sequences where CGI wizardry was required. The original theatrical trailer for Flags of Our Fathers is also included. --Jeff Shannon

Letters from Iwo Jima
Critically hailed as an instant classic, Clint Eastwood's Letters from Iwo Jima is a masterwork of uncommon humanity and a harrowing, unforgettable indictment of the horrors of war. In an unprecedented demonstration of worldly citizenship, Eastwood (from a spare, tightly focused screenplay by first-time screenwriter Iris Yamashita) has crafted a truly Japanese film, with Japanese dialogue (with subtitles) and filmed in a contemplative Japanese style, serving as both complement and counterpoint to Eastwood's previously released companion film Flags of Our Fathers. Where the earlier film employed a complex non-linear structure and epic-scale production values to dramatize one of the bloodiest battles of World War II and its traumatic impact on American soldiers, Letters reveals the battle of Iwo Jima from the tunnel- and cave-dwelling perspective of the Japanese, hopelessly outnumbered, deprived of reinforcements, and doomed to die in inevitable defeat. While maintaining many of the traditions of the conventional war drama, Eastwood extends his sympathetic touch to humanize "the enemy," revealing the internal and external conflicts of soldiers and officers alike, forced by circumstance to sacrifice themselves or defend their honor against insurmountable odds. From the weary reluctance of a young recruit named Saigo (Kazunari Ninomiya) to the dignified yet desperately anguished strategy of Japanese commander Tadamichi Kuribayashi (played by Oscar-nominated The Last Samurai costar Ken Watanabe), whose letters home inspired the film's title and present-day framing device, Letters from Iwo Jima (which conveys the bleakness of battle through a near-total absence of color) steadfastly avoids the glorification of war while paying honorable tribute to ill-fated men who can only dream of the comforts of home. --Jeff Shannon

On the DVDs
Like the film itself, the two-disc special edition of Letters from Iwo Jima is predominantly Japanese in content, and that's as it should be. Disc 1 presents the film in a flawless widescreen transfer, with a Dolby Digital 5.1 Surround soundtrack that perfectly captures the film's wide dynamic range. The optional subtitles can be turned off for those wishing to immerse themselves in a completely Japanese viewing experience. Disc 2 opens with "Red Sun, Black Sand: The Making of Letters from Iwo Jima," a 20-minute behind-the-scenes documentary that concisely covers all aspects of production, from director Clint Eastwood's initial decision to create a companion piece to Flags of Our Fathers, to interview comments from principal cast and crew, the latter including Flags screenwriters Paul Haggis and Letters screenwriter Iris Yamashita, costume designer Deborah Hopper, editor Joel Cox, cinematographer Tom Stern, production designer James Murakami (taking over for the ailing Henry Bumstead), and coproducer Rob Lorenz. "The Faces of Combat" is an 18-minute featurette about selecting the Japanese (and Japanese-American) cast of Letters, and how they were chosen through the international collaboration of Eastwood's long-time casting director Phyllis Huffman (who turned over some of her duties to her son while struggling with terminal illness) and Japanese casting associate Yumi Takada, who filled important roles with Japanese celebrities (like pop star Kazunari Ninomiya, who plays "Saigo") and unknown actors alike.

"Images from the Frontlines" is a 3.5-minute montage of images from the film and behind-the-scenes, set to the sparse piano theme of Eastwood's original score. The remaining bonus features chronicle the world premiere of Letters in Tokyo on November 15, 2006. The premiere itself is covered in a 16-minute featurette taped at the famous Budokan arena, where we see the red-carpet procession, a full-capacity audience despite cold November weather, and introductory comments from the film's primary cast and crew, many of them quite moving with regard to the satisfaction of working on a film that helps Japanese viewers come to terms with a painful chapter of their history. The following day's press conference (at the Grand Hyatt Tokyo hotel) is a 24-minute Q&A session covering much of the same territory, with additional testimony from principal cast & crew. Throughout this two-day event, it's clear that Eastwood (referring to himself as "a Japanese director who doesn't speak the Japanese language") was warmly embraced by the Japanese, and that Letters from Iwo Jima had served its intended purpose, reminding us of the horrors of war while uniting both Japanese and Americans in somber reflection, 61 years after the battle of Iwo Jima. --Jeff Shannon

On the bonus fifth disc is an A&E documentary Heroes of Iwo Jima from 2001 narrated by Gene Hackman, and "To the Shores of Iwo Jima," a 1945 short film that was Oscar-nominated for best documentary short.