Paperback (400 pages), kindle
The story of the man behind Pearl Harbor and the courageous young American fliers who flew the million-to-one suicide mission that shot him down. 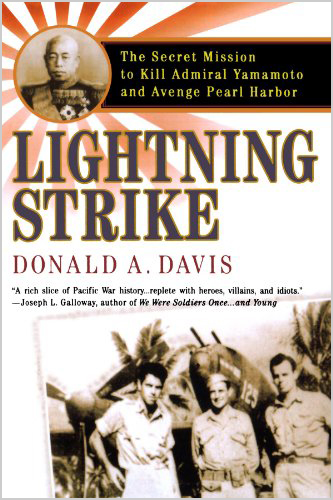 This is the story of the fighter mission that changed World War II.

It is the true story of the man behind Pearl Harbor - Admiral Isoroku Yamamoto - and the courageous young American fliers who flew the million-to-one suicide mission that shot him down.

Yamamoto was a cigar-smoking, poker-playing, English-speaking, Harvard-educated expert on America, and that intimate knowledge served him well as architect of the Japanese attack on Pearl Harbor. For the next sixteen months, this military genius, beloved by the Japanese people, lived up to his prediction that he would run wild in the Pacific Ocean. He was unable, however, to deal the fatal blow needed to knock America out of the war, and the shaken United States began its march to victory on the bloody island of Guadalcanal.

Donald A. Davis meticulously tracks Yamamoto's eventual rendezvous with death. After American code-breakers learned that the admiral would be vulnerable for a few hours, a desperate attempt was launched to bring him down. What was essentially a suicide mission fell to a handful of colorful and expendable U.S. Army pilots from Guadalcanal's battered "Cactus Air Force":

They flew the longest over-water fighter mission ever and ambushed and killed Yamamoto. After his death, the Japanese never won another major naval battle. But the victorious American pilots seemed cursed by the samurai spirit of the admiral and were tormented for the rest of their lives by what happened that day.

Davis paints unforgettable personal portraits of men in combat and unravels a military mystery that has been covered up at the highest levels of government since the end of the war.