The Rivalry That Divided America

Hardcover (270 pages), kindle, audiobook
Was Charles Lindbergh a Nazi sympathizer and anti-Semite? Or was he the target of a vicious personal vendetta by President Roosevelt? 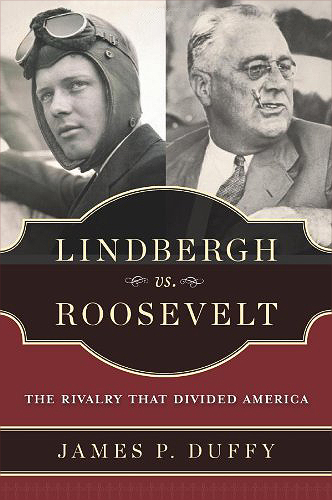 Was aviation pioneer and popular American hero Charles A. Lindbergh a Nazi sympathizer and anti-Semite? Or was he the target of a vicious personal vendetta by President Roosevelt?

In Lindbergh vs. Roosevelt, author James Duffy tackles these questions head-on, by examining the conflicting personalities, aspirations, and actions of Franklin D. Roosevelt and Charles A. Lindbergh. Painting a politically incorrect portrait of both men, Duffy shows how the hostility between these two American giants divided the nation on both domestic and international affairs. From canceling U.S. air mail contracts to intervening in World War II, Lindberg and Roosevelt’s clash of ideas and opinions shaped the nation’s policies here and abroad. Insightful, and engaging, Lindbergh vs. Roosevelt reveals the untold story about two of history’s most controversial men, and how the White House waged a smear campaign against Lindbergh that blighted his reputation forever.