DVD
From the difficult abandonment of the Philippines that left General Wainwright to surrender to the invading Japanese forces there, the struggle to return years later, and the eventual signing of Japan's surrender, this historical sketch brilliantly delivers 's passion for duty, honor and country. 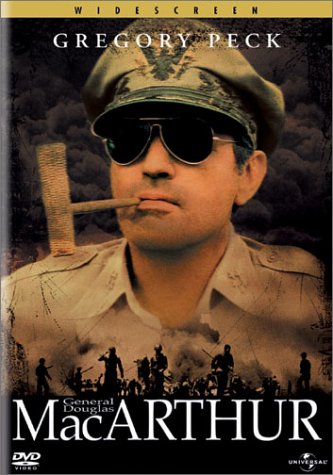 The speeches alone are a glory to listen to, full of passion for "duty, honor, and country," and the words are exquisitely crafted as to stir the soul.

The film starts and ends in MacArthur's beloved West Point as he speaks to the cadets, and is among the many memorable scenes. Others are the difficult abandonment of the Philippines that left General Wainwright to surrender to the invading Japanese forces there, the struggle to return years later, and the signing of Japan's surrender, on the USS Missouri in Tokyo Bay, which is a fabulous re-staging of the historic event.

To gain an understanding of the events of the Pacific war and MacArthur's brilliant post-war command in occupied Japan, this film certainly delivers.

Gregory Peck gives a monumental portrayal of MacArthur; it is nuanced and brilliant, and from the old film clips we have seen of General MacArthur, subtly captures his posture and movement, with his many different pipes.

A historical sketch on one of the greatest and most controversial general in American history as played by Academy Award-winner Gregory Peck. While delivering the farewell address to the students of West Point in 1962, General Douglas MacArthur reflects on the events of his life: his achievements as the head of the American forces in the Pacific during World War II, his years governing post-war Japan, and his final campaign in Korea which lead to clashes with President Harry S Truman.

Gregory Peck, Ed Flanders. A biographical profile tracing the career of General MacArthur from early WWII through his dismissal during the Korean War.