In Defense of Internment:

Hardcover (376 pages), kindle, audiobook
Neither the internment of ethnic Japanese - not to mention ethnic Germans and Italians - nor the relocation and evacuation of Japanese Americans from the West Coast were the result of war hysteria or race prejudice as historians have taught us. 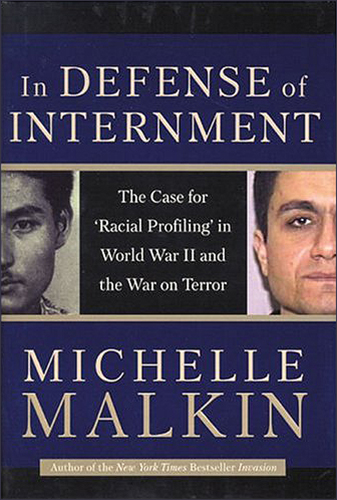 This diligently documented book shows that neither the internment of ethnic Japanese - not to mention ethnic Germans and Italians - nor the relocation and evacuation of Japanese Americans from the West Coast were the result of war hysteria or race prejudice as historians have taught us.

Everything you've been taught about the World War II "internment camps" in America is wrong:

In her latest investigative tour-de-force, New York Times best-selling author Michelle Malkin sets the historical record straight-and debunks radical ethnic alarmists who distort history to undermine common-sense, national security profiling. The need for this myth-shattering book is vital. President Bush's opponents have attacked every homeland defense policy as tantamount to the "racist" and "unjustified" World War II internment. Bush's own transportation secretary, Norm Mineta, continues to milk his childhood experience at a relocation camp as an excuse to ban profiling at airports. Misguided guilt about the past continues to hamper our ability to prevent future terrorist attacks.

In Defense of Internment shows that the detention of enemy aliens, and the mass evacuation and relocation of ethnic Japanese from the West Coast were not the result of irrational hatred or conspiratorial bigotry. This document-packed book highlights the vast amount of intelligence, including top-secret "MAGIC" messages, which revealed the Japanese espionage threat on the West Coast.

Malkin also tells the truth about:

With trademark fearlessness, Malkin adds desperately needed perspective to the ongoing debate about the balance between civil liberties and national security. In Defense of Internment will outrage, enlighten, and radically change the way you view the past-and the present.

Michelle Malkin is author of the New York Times best-seller, Invasion, which ignited debate on immigration and national security in the wake of the September 11 terrorist attacks on America. Her nationally syndicated newspaper column, celebrating its fifth year with Creators Syndicate, is published in nearly 200 newspapers across the country. Malkin is a FOX News Channel contributor and former editorial writer and columnist for the Seattle Times and the Los Angeles Daily News. Malkin lives with her husband and children in Maryland.