Kindle (~437 pages)
Captured by the Japanese soon after the attack on Pearl Harbor, Guam was retaken in 1944, but not easily. 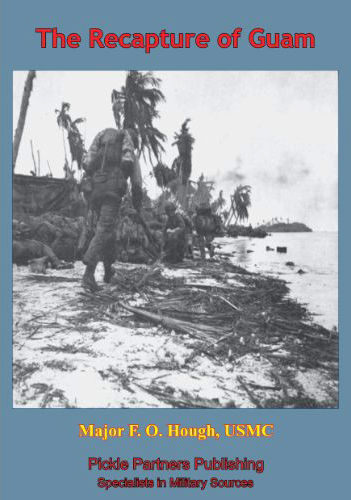 Set in the Marianas group of islands is the American possession of Guam, U.S. territory since 1898; it was the captured by the Japanese soon after the infamous attack on Pearl Harbor and served as a symbol of the Japanese expansion. The American Forces sailed into view of Guam in 1944 determined to recapture the island for strategic and political purposes, but knew that the Japanese defenders take a heavy toll of them from their prepared positions. The story of the capture of the island is an epic of courage, bloodshed, fierce resistance by the Japanese and the indomitable will to conquer of the U.S. Marines.

Contains 99 photos and 32 maps and charts.

“I have always had a feeling of deep satisfaction in having been the commander of one of the assault elements that returned the American flag to Guam. The island once more stands ready to fulfill its destiny as an American fortress in the Pacific.

The conquest of Guam was a decisive triumph of combined arms over a formidable Japanese defensive force which took full advantage of the island's rugged terrain.

The heroic action of the veteran Marines who seized Orote Peninsula and Apra Harbor gave the Navy a much-needed advance base for further operations in the Pacific. Once marine and Army units captured northern Guam, engineers moved in and out from the jungle the airfields from which the Twentieth Air Force launched B-29 raids, bringing the full realization of war to the Japanese homeland.” -LEMUEL C. SHEPHERD, JR., GENERAL, U. S. MARINE CORPS, COMMANDANT OF THE MARINE CORPS