Follow the crew of a B-17 bomber on its final and most dangerous mission over Germany, as just about everything that can go wrong does go wrong. 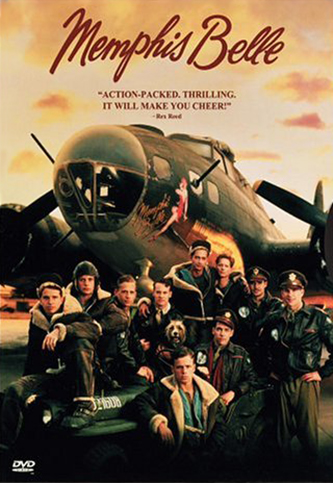 Memphis Belle does a great job of giving viewers a sense of what air crews in heavy bombers experienced during World War II, in spite of its cliché-filled Hollywood-ization. As far as historical accuracy is concerned, only the name of the B-17 Flying Fortress is real and the fact that it was the first within the 8th Air Force to complete 25 missions. Everything else is pure fiction, but very emblematic of the Air War over Europe.

Thrilling World War II adventure centering on the final flight of the legendary Memphis Belle, a B-17 bomber with Dresden as its target. Meet the gung-ho members of its young crew (played by Eric Stoltz, Matthew Modine, Billy Zane and Harry Connick, Jr., among others) and be mesmerized by amazing flight sequences.

If you've never seen an aviation movie before in your entire life, you'll be blissfully ignorant of the fact that Memphis Belle shamelessly (and yet gloriously) incorporates just about every cliché in the flight-movie handbook. If you're a big fan of aviation movies -- especially movies about World War II bomber crews -- you'll be glad that the genre's clichés have been handled with such professional flair.

As it follows the crew of a B-17 bomber on its final and most dangerous mission over Germany, Memphis Belle may be little more than a slick and highly authentic presentation of familiar thrills and characters, but it's a rousing piece of entertainment. Featuring an ensemble cast of fresh faces who've since enjoyed thriving careers (including Billy Zane, Sean Astin, Eric Stoltz, D.B. Sweeney, and Harry Connick Jr.), the movie exists as a fitting tribute to the men who fought and often died in the air over hostile territory. It's the Hollywood version of a 1944 wartime documentary made by legendary director William Wyler (whose daughter served as one of this film's producers), and as such it's a bit contrived and melodramatic. And yet, this exciting movie is almost certain to grab and hold your attention, offering an honorable reminder of the bravery and integrity that were crucial ingredients of any bomber's crew. --Jeff Shannon