DVD
The mother of all horror films, shown at the Nuremburg trials. 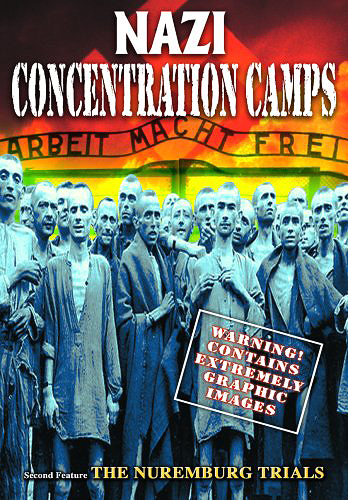 Two features: A horrifying exploration of Nazi death camps and the Nuremberg war crimes trial of Hermann Göring and twenty other Nazi leaders.

This will not be the slick, polished documentary you might be expecting. It is very crude, containing much of the actual footage that Eisenhower ordered to be filmed by members of the US Army Signal Corps of camps as they were liberated and is presented much the way the footage was presented at the Nuremberg trials. Expect nothing more.

For a slick, polished version that incorporates much of the original footage into powerful documentary, check out Frontline - Memory of the Camps from PBS Home Video.

From some of the Amazon reviews...

Perhaps it is just as well that this is grainy and sometimes out of focus, because the scenes are so horrifying. The documentary was made by the U.S. Government as an overview of what American soldiers found when they liberated Nazi concentration camps. It would have been extremely difficult to fake any of the scenes.

I've talked with soldiers who were there, who took pictures and listened to the pleas of the living. They also smelled the camps, and that cannot be conveyed in this grainy DVD. Still, it is bad enough.

This is not a comprehensive or in-depth depiction, but it is as much as I can stand to watch. How anyone could deny that the Holocaust happened boggles the mind.