Paperback (768 pages), kindle, audiobook
Pulitzer Prize winning chronicle of one of the most vibrant and revolutionary periods in the history of the United States and an intimate portrait of Eleanor and Franklin Roosevelt during a time in which a new, modern America was born. 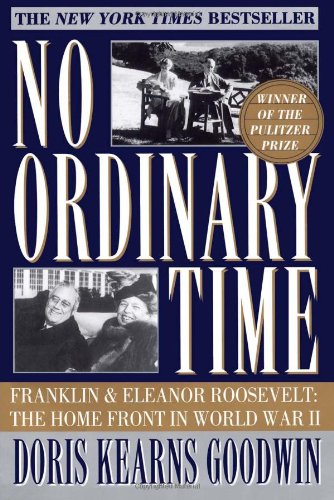 Winner of the Pulitzer Prize

No Ordinary Time is a monumental work, a brilliantly conceived chronicle of one of the most vibrant and revolutionary periods in the history of the United States. With an extraordinary collection of details, Goodwin masterfully weaves together a striking number of story lines — Eleanor and Franklin's marriage and remarkable partnership, Eleanor's life as First Lady, and FDR's White House and its impact on America as well as on a world at war.

Goodwin effectively melds these details and stories into an unforgettable and intimate portrait of Eleanor and Franklin Roosevelt and of the time during which a new, modern America was born. A compelling chronicle of a nation and its leaders during the period when modern America was created. With an uncanny feel for detail and a novelist's grasp of drama and depth, Doris Kearns Goodwin brilliantly narrates the interrelationship between the inner workings of the Roosevelt White House and the destiny of the United States. Goodwin paints a comprehensive, intimate portrait that fills in a historical gap in the story of our nation under the Roosevelts.