Warning: session_start(): Cannot start session when headers already sent in /homepages/7/d92572805/htdocs/scanningwwii/v/wp-content/plugins/wpgdpr_g8zuDP/index.php on line 460
 Ohm Kruger 
Warning: count(): Parameter must be an array or an object that implements Countable in /homepages/7/d92572805/htdocs/scanningwwii/v/wp-content/plugins/amazon-discount/amazon-config.php on line 680

DVD
Conceived by Goebbels' Propaganda Ministry: the most incendiary of Nazi Germany's anti-British films and one of the most audaciously cynical movies ever made. 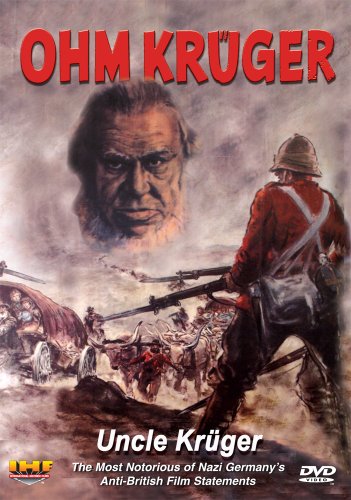 The Most Notorious of Nazi Germany's Anti-British Film Statements

The most incendiary of Nazi Germany's anti-British films, and one of the most audaciously cynical movies ever made. Conceived by Joseph Goebbels' Propaganda Ministry as a propagandistic blockbuster, this lavish production leaves no stone unturned in its bitter indictment of Great Britain, which at the time (early 1941) stood alone as Germany's wartime foe. In its historical re-enactment of the Second Boer War, Ohm Krüger depicts Britain as a relentlessly aggressive power, hell-bent on world domination; the film's remarkable set pieces feature a scotch-swilling Queen Victoria, a cruelly conniving Cecil Rhodes and a Winston Churchill look-alike who presides over a murderous concentration camp. On the Boer side stands saintly "Uncle" Krüger, portrayed as a model of simple dignity and unerring moral right by one of the world cinema's greatest actors, Emil Jannings.

By far the most expensive film produced in Nazi Germany up to the time, Ohm Krüger offers plenty of "wild west" frontier grit alongside its vivid battle scenes, as though John Ford's Monument Valley had been transposed onto South Africa's Transvaal region. The shattering conclusion - a concentration camp massacre provokes and disturbs even today, not only due to its undeniable artistry, but more because of how it invites comparison with the still greater horrors we associate with Nazi Germany - atrocities this movie was designed to rationalize and exonerate.