Kindle (~148 pages)
Originally published in 1959, the book's author, George John Dasch, provides a first-hand account of the German sabotage mission to America (which he sabotaged), the subsequent trial and the years-long, unsuccessful fight to clear his name. 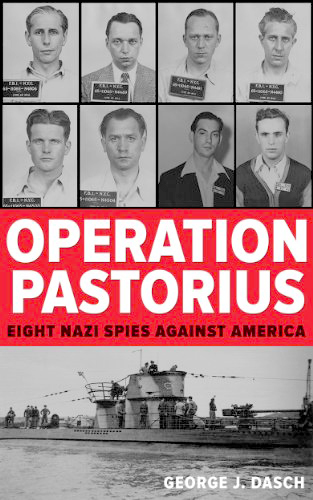 Operation Pastorius, originally published in 1959 as Eight Spies Against America, recounts the World War II story of the landing by submarine of eight Nazi spies on beaches on Long Island and Florida, equipped with explosives and a large amount of U.S. dollars. Their mission was to disrupt and destroy vital war manufacturing plants located in the Tennessee Valley and elsewhere in the United States.

The book's author, and leader of the group that landed in New York, George J. Dasch, provides a first-hand account of his life, the training for the operation in Germany, and his subsequent capture, trial, and years-long, unsuccessful fight to clear his name.

German spies and saboteurs in America...