Hardcover (376 pages), kindle
The bomber plant at Willow Run attracted tens of thousands of workers from across the US to help build the nation's "Arsenal of Democracy." 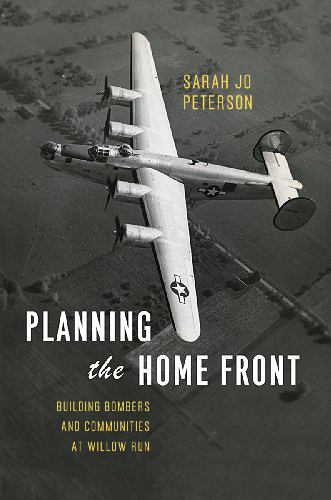 Before Franklin Roosevelt declared December 7 to be a "date which will live in infamy"; before American soldiers landed on D-Day; before the B-17s, B-24s, and B-29s roared over Europe and Asia, there was Willow Run. Located twenty-five miles west of Detroit, the bomber plant at Willow Run and the community that grew up around it attracted tens of thousands of workers from across the United States during World War II. Together, they helped build the nation's "Arsenal of Democracy," but Willow Run also became the site of repeated political conflicts over how to build suburbia while mobilizing for total war.

In Planning the Home Front, Sarah Jo Peterson offers readers a portrait of the American people —- industrialists and labor leaders, federal officials and municipal leaders, social reformers, industrial workers, and their families —- that lays bare the foundations of community, the high costs of racism, and the tangled process of negotiation between New Deal visionaries and wartime planners. By tying the history of suburbanization to that of the home front, Peterson uncovers how the United States planned and built industrial regions in the pursuit of war, setting the stage for the suburban explosion that would change the American landscape when the war was won.