Paperback (480 pages), kindle, audiobook
Former Secretary of State Madeleine Albright's moving memoir of her formative years in Czechoslovakia during the tumult of Nazi occupation, fascism, and the onset of the Cold War. 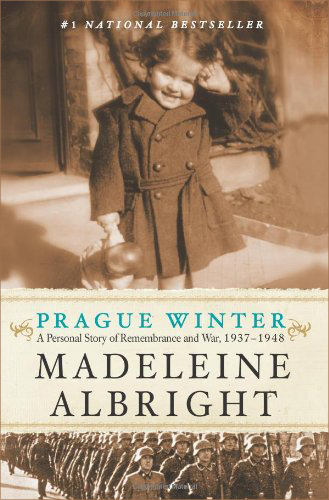 “A remarkable story of adventure and passion, tragedy and courage set against the backdrop of occupied Czechoslovakia and World War II.” —Václav Havel

From former Secretary of State Madeleine Albright comes a moving and thoughtful memoir of her formative years in Czechoslovakia during the tumult of Nazi occupation, World War II, fascism, and the onset of the Cold War. An intensely personal journey into the past that offers vital lessons for the future, Prague Winter combines the intimacy of an autobiography with the drama of an exciting and well-told story—all underpinned by the gravity and intelligence of a serious work of history. The result is a highly readable and incisive work filled with tragedy and triumph, a resonant narrative informed by Albright’s remarkable life experience and her characteristic candor in speaking hard truths.


On the evening of February 4, 1997, I led the cabinet into the House of Representatives prior to the President’s annual address—the first woman ever to do so. Exchanging greetings with senators and other dignitaries, my heart should have been joyful; instead, I was stunned. That morning’s Washington Post headline had read: “Albright Family Tragedy Comes to Light.”

I was 59 when I learned from a reporter and from certain letters I had received that my ancestral heritage was Jewish and that more than two dozen of my relatives had died in the Holocaust. The revelation shook my deeply ingrained sense of identity, and prompted me to seek answers to questions that I had never before thought to ask. That search began with visits to the small towns in Czechoslovakia where my parents had grown up and to the ancient synagogue where the names of Holocaust victims are enshrined. Prague Winter is a continuation of that personal journey, but also a much wider tale concerning a generation compelled to make painful moral choices amid the tumult of war.

In 1939, when efforts by British and French leaders to appease Hitler had backfired, the Nazis invaded my homeland. I was not yet two years old. My parents escaped with me to London where my father became head of broadcasting for the Czechoslovak government in exile. Strangers in an embattled land, we endured along with our new neighbors the terrible bombing of the Blitz. Back home, the German occupation quickly evolved into a reign of terror under the direction of Reinhard Heydrich, “The Butcher of Prague.” As preparations were made to exterminate the country’s Jews, Czechoslovak parachutists returned to their native soil with a mission: to kill Heydrich -- the only successful assassination of a senior Nazi during the war. In the months that followed that daring assault, Czechs suffered from Hitler’s vengeance, while Jews confined to the infamous Terezin ghetto struggled to retain hope despite overcrowded conditions and the periodic departure of fellow inmates on trains to the east. In England, Czechoslovak leaders maneuvered to reclaim their country’s independence; my mother and father agonized over the fate of loved ones who had remained behind.

From the day America entered the war, my parents and their friends were confident the Allies would win. As democrats from Central Europe, they prayed that the United States—not the Soviet Union—would wield the decisive postwar influence in our region. It was not to be. When at last the Nazis were defeated, Czechoslovakia became again a battleground between democracy and totalitarianism; before long, my family was forced into exile for the second time, finding a permanent home in America.

The story of Prague Winter is often as intensely personal as a mother’s letter, a father’s hidden sorrow, and the earnest artwork of an imprisoned ten-year-old cousin. The themes, however, are universal: loyalty and betrayal, respect and bigotry, accommodating evil or fighting back. What fascinates me is why we make the choices we do. What prompts one person to act boldly in a moment of crisis and a second to seek shelter in the crowd? Why do some people become stronger in the face of adversity while others quickly lose heart? What drives many of us to look down on neighbors based on the flimsy pretexts of nationality and creed? Is it education, spiritual belief, parental guidance, traumatic events, or more likely some combination that causes us to follow the paths that we do? My search for answers compelled me to look back—to the time of harshest winter in the city of my birth.