DVD, Blu-ray
Jaw-dropping aerial action and thrilling special effects give a breathtaking tribute to the unsung heroes who rose above extraordinary challenges and ultimately soared into history. 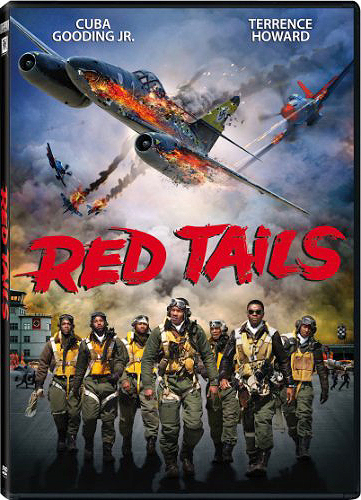 Italy, 1944. As the war takes its toll on Allied forces in Europe, a squadron of black pilots known as the Tuskegee Airmen are finally given the chance to prove themselves in the sky...even as they battle discrimination on the ground.

Based on the true adventures of the Tuskegee Airmen, who battled Nazis in the air and racism on the ground, Red Tails is built around four pilots, each with a character-type-appropriate nickname: the daredevil is named Lightning (David Oyelowo), the likable boozer is Easy (Nate Parker), the kid trying to prove himself is Junior (Tristan Wilds), and the joker is called, uhm, Joker (Elijah Kelley). While these four chafe at their lousy assignments at the front, Colonel Bullard (Terrence Howard, applying his steely rasp to fervent, inspirational speeches) fights back in Washington to give these men a chance to prove themselves... and when they get that chance, prove themselves they do.

This is a crucial bit of history - racial integration in the military was a key step leading to the civil rights movement decades later. Regrettably, this powerful material has been reduced to ham-fisted clichés, groaning under the weight of clumsy exposition. Such flimsy hokum is particularly surprising coming from co-screenwriter Aaron McGruder, creator of the sharply satirical The Boondocks; one suspects that the heavy hand of producer George Lucas was a factor. Nonetheless, when Red Tails takes to the air, the movie - like the pilots - shows its mettle. Though the digital effects are inexplicably uneven, the dizzying dogfight choreography will make your nerves tingle. --Bret Fetzer