Hardcover (320 pages), kindle
Jean Moulin's story remains full of unanswered questions, the truth of his life being far more complicated than the legend of him that grew after the war. 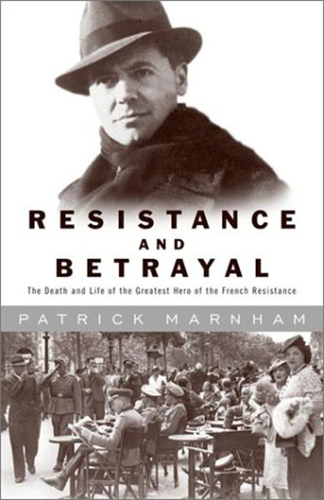 “Enthralling and intelligent, a masterly exploration of
the sinister labyrinth that was wartime France . . .
It is a remarkable book, utterly fascinating.”
—Allan Massie

Not long after 2:00 p.m. on June 21, 1943, eight men met in secret at a doctor’s house in Lyon. They represented the warring factions of the French Resistance and had been summoned by General de Gaulle’s new envoy, a man most of them knew simply as “Max.”

Minutes after the last man entered the house, the Gestapo broke in, led by Klaus Barbie, the infamous “Butcher of Lyon.” The fate awaiting Barbie’s prisoners was torture, deportation, and death. “Max” was tortured sadistically but never broke: he took his many secrets to his grave. In that moment, the legend of Jean Moulin was born.

Who betrayed Jean Moulin? And who was this enigmatic hero, a man as skilled in deception as he was in acts of heroism? After the war, his ashes were transferred to the Panthéon—France’s highest honor—where his memory is revered alongside that of Voltaire and Victor Hugo. But Moulin’s story is full of unanswered questions: the truth of his life is far more complicated than the legend conveniently manufactured by de Gaulle.

Resistance and Betrayal tells for the first time in English the epic story of France’s greatest war hero, a Schindler-like character of ambiguous motivation. A winner of the Marsh Prize for biography, praised by Graham Greene and Julian Barnes, Patrick Marnham is a brilliant storyteller with a keen appreciation for the complex maze of moral compromises navigated in times of war. Told with the drama and suspense of the best espionage fiction, Resistance and Betrayal brings to life the dark and duplicitous world of the French Resistance and offers a startling conclusion to one of the great unsolved mysteries of the Second World War.

“A writer afoot with a ruthless vision and armed with a literary style which burns away the surface of what it describes . . .
His main strength lies in his genius as a storyteller.”
—Jonathan Raban

The Man Who Wasn’t Maigret

“I doubt if there will be a better, or better-written, portrait of Simenon for a long time.” —Julian Barnes

“I can confidently say there will never be a better book on this subject. It makes absolutely compulsive reading.”
—A. N. Wilson

“Excellent, penetrating, fully researched and very well written . . . Adds to our understanding not only of Simenon’s art but of
the art of the novel itself.” —Muriel Spark