Paperback (304 pages), kindle
A fascinating look at how aggressive, no holds barred British propaganda brought America to the brink of war, and left it to the Japanese and Hitler to finish the job. 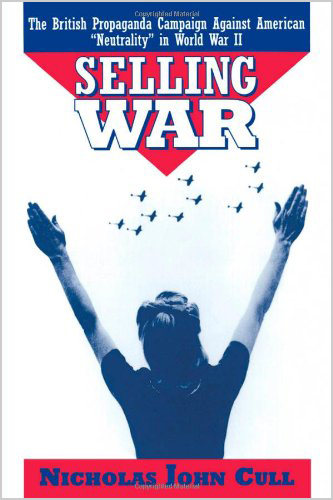 British propaganda brought America to the brink of war, and left it to the Japanese and Hitler to finish the job. So concludes Nicholas Cull in this absorbing study of how the United States was transformed from isolationism to belligerence in the years before the attack on Pearl Harbor. From the moment it realized that all was lost without American aid, the British Government employed a host of persuasive tactics to draw the US to its rescue. With the help of talents as varied as those of matinee idol Leslie Howard, Oxford philosopher Isaiah Berlin and society photographer Cecil Beaton, no section of America remained untouched and no method -- from Secret Service intrigue to the publication of horrifying pictures of Nazi atrocities -- remained untried. The British sought and won the support of key journalists and broadcasters, including Edward R. Murrow, Dorothy Thompson and Walter Winchell; Hollywood film makers also played a willing part. Cull details these and other propaganda activities, covering the entire range of the British effort. A fascinating story of how a foreign country provoked America's involvement in its greatest war, Selling War will appeal to all those interested in the modern cultural and political history of Britain and the United States.