Kindle only (~670 pages)
The onset of the war couldn't have come at a worse time for Walt Disney and his Studio. But Disney and his staff quickly adapted to the new reality by becoming a bonafide war plant. 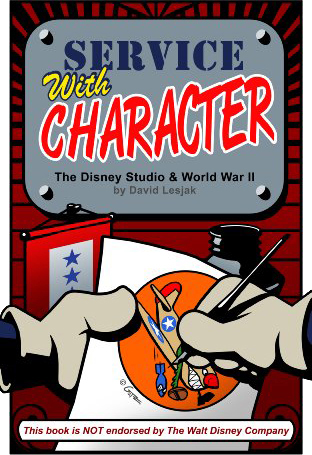 "But fate had other plans for us. The war turned our Studio into a military reservation. All facilities were devoted to making films for the war effort...insignia for submarines, planes, ships, and tanks...training films for the Army, Navy, and Air Force." Walt Disney.

World War II had a profound impact on Walt Disney and his Studio. The onset of the war couldn't have come at a worse time for the Hollywood producer. The Studio was coming off a highpoint in its history. Revenue from Snow White enabled Disney to build his new, ultra-modern Studio in Burbank, and feature production was in full swing.

Just as a string of new Disney features were about to open, the Nazi juggernaut rolled across most of Europe shuttering theater doors in the process. Prewar, Disney films were distributed to 55 countries. By 1944, 81% of the Company’s revenue was being generated by just the United States, Canada, and England. As the yoke of oppression descended on Europe, Walt Disney’s ledger flowed from black to red.

Disney and his staff quickly adapted to the new reality by becoming a bonafide war plant. Feature film production was replaced, for the most part, with government and military work. Instead of classic fairy tales, Disney produced training films for all branches of the military, incentive films for the Federal Government, and a series of propaganda films the Studio’s own publicity Department referred to as “psychological productions.” The day after Pearl Harbor, Disney entered into a contract with the Navy for the production of a series of airplane identification films. Government worked sustained his Studio for the war's duration and Walt Disney, ever the patriot, offered his services at cost or for free.

And as new fighting units were formed, Disney artists fulfilled 1,200 requests for combat insignia sent in not only by American servicemen looking for a familiar reminder of life back home, but also by men serving in the units of Allied nations like Britain, Canada, China, France, and Poland.

Service With Character explores this fascinating chapter in the history of The Walt Disney Studios through the following chapters:

Ten appendices, end notes, and over 385 images (340 in color) supplement the text.

As one newspaper writer reported at the time: “How fortunate America is to have Walt [Disney] on the job today. He’s a . . . genius for whom the Axis would gladly give a dozen crack divisions.”