British Intelligence and Irish Neutrality during the Second World War

Paperback (360 pages), kindle
How Britain dealt with challenges in Ireland through a combination of diplomacy, covert gathering of intelligence, propaganda, and intimidation. 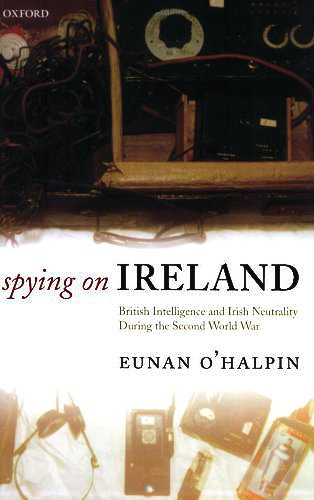 Irish neutrality during the Second World War presented Britain with significant challenges to its security. Exploring how British agencies identified and addressed these problems, this book reveals how Britain simultaneously planned sabotage in and spied on Ireland, and at times sought to damage the neutral state's reputation internationally through black propaganda operations. It analyses the extent of British knowledge of Axis and other diplomatic missions in Ireland, and shows the crucial role of diplomatic code-breaking in shaping British policy. The book also underlines just how much Ireland both interested and irritated Churchill throughout the war.

Rather than viewing this as a uniquely Anglo-Irish experience, Eunan O'Halpin argues that British activities concerning Ireland should be placed in the wider context of intelligence and security problems that Britain faced in other neutral states, particularly Afghanistan and Persia. Taking a comparative approach, he illuminates how Britain dealt with challenges in these countries through a combination of diplomacy, covert gathering of intelligence, propaganda, and intimidation. The British perspective on issues in Ireland becomes far clearer when discussed in terms of similar problems Britain faced with neutral states worldwide.

Drawing heavily on British and American intelligence records, many disclosed here for the first time, Eunan O'Halpin presents the first country study of British intelligence to describe and analyse the impact of all the secret agencies during the war. He casts fresh light on British activities in Ireland, and on the significance of both espionage and cooperation between intelligence agencies for developing wider relations between the two countries.