Paperback (394 pages), kindle
Fighting men from a country frowned upon for its "cowardly" neutrality participated in all the crucial battles of both World Wars I and II. 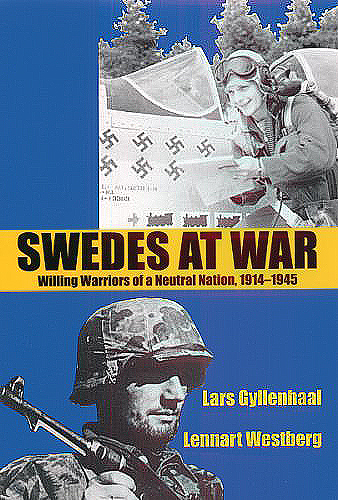 From the mud and bloody hell of Flanders to forlorn battles in Siberia and bitter street fighting in the very heart of Berlin 1945. From Africa to the Arctic, fighting men from a country frowned upon for its "cowardly" neutrality participated in all the crucial battles of World Wars I and II. Their homeland was Sweden, which has enjoyed almost two hundred years of peace. Swedes at War is the first book in English to reveal that, despite Sweden's policy of neutrality, no fewer than 23,000 Swedish citizens went to war between 1914 and 1945.

Swedes at War also puts an end to the myth that most Swedes enlisted in Hitler's forces. Only 200 joined the Waffen-SS or the Wehrmacht of 1939–1945. In the same period 9,000 Swedish citizens joined the Americans, the British, the Norwegians, and the Poles. In addition, well over 200,000 men of Swedish descent served in the US, British, Canadian, and Australian Armed Forces--facts in which Americans, Australians, Britons, and Canadians of Swedish descent can take pride.

Some of the striking characters you will get to know in the course of this book are Anton Nilson, Lenin's Swedish aviator; John Svensson, who busted Italian tanks in Spain; Allied special operations hero Allan Mann; and Nils Rosén, who survived 600 days as a panzer commander on the German-Soviet front. What motives took them from the safety of Sweden to the battlefield, and what did they learn there?